The American Bulldog, originally known as the “English White Bulldog”, “Alabama Bulldog”, and “Southern Bulldog,” was originally bred to work large animals such as cattle and hogs. Extremely versatile and talented, American Bulldogs are often used for hunting, tracking, weight pulling, and guarding, in addition to making wonderful companions. 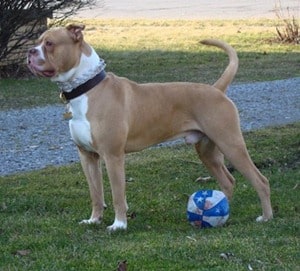 The American Bulldog is alert and friendly with family members and others that they are properly introduced to. Additionally, they really seem to love children. They may, however, be aggressive around other dogs. They will get along with other animals if properly socialized. They should begin their obedience training early because they can be very stubborn learners and slow to accept their masters.

They should not be overly timid or shy towards humans or overly aggressive with other dogs. They should be courageous and determined, though not hostile. If they do show aggressive or biting tendencies, teaching them to play with balls or discs will allow them to redirect their aggression as well as allow them to chew on toys as opposed to biting humans or other animals.

They are known for their heroic acts for their masters and their families. They need to be around people to be happy. They may drool and slobber, so potential owners should have a willingness to clean up after these dogs. They should do well in an apartment or small home if properly exercised. They are not a good choice for inexperienced dog owners. They are somewhat inactive indoors and will do well with at least a medium sized backyard. If not used as a working dog, they will need to exercise daily.

At maturity, American Bulldogs will grow to a height of 22 to 28 inches. Males will weigh between 70 and 120 pounds and bitches between 60 and 100 pounds. Their coats are short and stiff. Coat colors are white, white with brindle or red, brindle, and red with white. Their coats require a quick brushing once a week. They are very muscular and well built with a large head and powerful jaws. The males tend to be stockier and heavier boned than the females.

The American Bulldog probably descended from English bulldogs; originating in the United States in the 18th century. Traditionally, they had been used for working cattle and hogs. The lineage of all American Bulldogs can be traced back to four ancestors, (Williamson, Scott, Bailey & Johnson.) from the Alabama/Georgia area.

The American Bulldog needs to be socialized and obedience trained at an early age to prevent aggression towards other animals. Training will also help them be less reserved around strangers.

The American Bulldog is susceptible to, Demodex mange, atopy and hip dysplasia. It has been reported that American Bulldogs can have hypersensitive skin towards fleas and other outdoor allergens. It is best to treat them with preventative flea medication to prevent biting, scratching and hair loss.