The Rotterman dog is a Rottweiler and Doberman mix, a dog that seems to be designed both as a guard and as a family member. There are a number of characteristics that are common for both breeds that form the Rotterman hybrid. One of them is that they’re both guard dogs, another is that they have short hair that doesn’t require a lot of maintenance. The weight is close enough as well.

Overall, these two breeds are quite similar in the way they look and behave, so as far as the temperament goes, you’re getting dogs that are almost predictable. Since you’re getting a mixed dog, you usually don’t have any guarantee that there aren’t other breeds mixed somewhere in there. You might have a dog that is not only Doberman and Rottweiler, but also a bit of German Shepherd, and you might not have any idea. Keep reading to learn about the Doberman Rottweiler mix, the hybrid dog known as a Rotterman.

Rottweiler is a breed of working dog, probably descended from a herding dog used by the Roman armies to drive their cattle and to guard their camps. The breed, revived early in the 20th century and used for police work, was recognized in the U.S. in 1931.

Rottweilers are fairly large, strongly built, and intelligent, making excellent guard dogs. The short, coarse, flat hair is black, with tan to dark brown markings. The tail is short and carried horizontally. Males stand about 24 to 27 in. and females about 22 to 26 in. The weight ranges from 80 – 110 lb, which means that if your Rotterman takes from the Rottweiler side of the family, it could be quite a large dog.

The Rottweiler makes a wonderful companion, often following their family members from room to room in the home. When introduced at a young age they are very gentle and loving to children and good with other animals. Because of its size and strength, it is imperative that they receive proper socialization and obedience training from an early age.

A Doberman is considered first of all a guard dog, bred to be fast to act, intimidating and quite ferocious. Though designed to be guard dogs first, they can be very loyal and kind, great additions to any family that is looking for a pet. They do need a bit of exercise on a daily basis. The Doberman was created by a tax collector called Louis Dobermann at the end of the 19th century, as a protection dog during his daily duties. Both the Doberman and the Rottweiler are German dogs.

Size of a Doberman Dog

Grooming of a Doberman Pinscher

If the Rotterman will take its coat from the Doberman you can expect it to be thick and short, smooth and kept closely to the body. It doesn’t require a lot of grooming.

Check out below a picture with an adult Rotterman and that of a puppy Doberman Rottweiler mix. 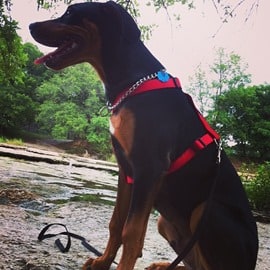 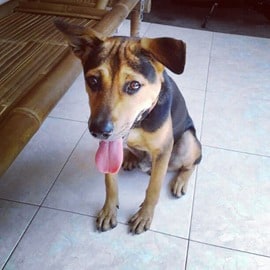