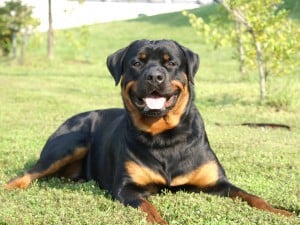 Rottweilers were bred in Germany to drive cattle through the towns. The name Rottweiler comes from the word ‘Rottweill,’ a town in Germany that was the ‘end of the line’ for the cattle drives.The Rottweiler is a powerfully built dog that can make a good pet, if well bred and well trained. They are best described as dominant and confident dogs. And for this reason they may not be suitable for first time dog owners. These beautiful dogs require good socialization and training from puppy-hood.

While Rottweilers have gained some bad press in recent years, a well-bred Rottweiler should not display aggression towards people and animals. Rottweilers are traditionally calm, confident, good-natured animals. However, their increasing popularity in the United States has led to increasing instances of ‘backyard breeding,’ which has served in propagating certain behavior and health faults. For this reason, it is incredibly important to acquire a Rottweiler from a reputable breeder. 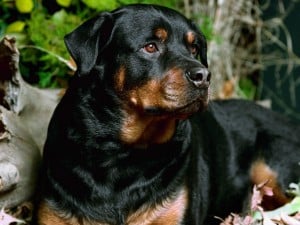 If a Rottweiler is well bred, it can make a good pet and a good guard dog due to their protective nature. Although a well-bred, well-trained Rottweiler would not likely hurt a child on purpose, because of their large, powerful size they should be supervised around small children. Although ability to deal with other animals varies from dog to dog, some Rottweilers may display aggression or dominant behavior to smaller animals. For this reason they have been classified as relatively aggressive dogs.

The Rottweiler is a medium to large dog, reaching about 27 inches in height and weighing up to 110 pounds on average. Larger individuals are not unusual, but they are not the norm. They have a muscular frame with a deep chest. Rottweilers are always black and most have markings on the face in a rust or mahogany color. The Rottweiler’s tail is usually docked short and carried parallel to the ground. These beautifully powerful dogs are to be bred compact and square.

In addition to cattle driving, Rottweilers were also instrumental as protection for the cattle and the owners, and to pull carts. As the small towns grew bigger, and railways were built to transport people and goods into the towns, the cattle drives were banned from going through the small villages. Donkeys eventually replaced Rottweilers as cart animals. Because Rottweilers were far more prevalent as working dogs than as companions, with the downfall of two of their major industries, the breed’s population began to decline. In 1900, only a single Rottweiler existed in all of Rottweill. 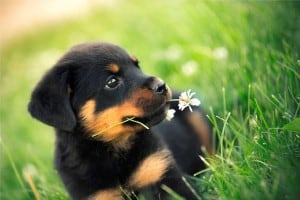 Several years later, Rottweilers were recognized as potential police dogs because of their size, strength, loyalty, and intelligence. The Allgemeiner Deutscher Rottweiler Klub formed in 1921. Their motto was ‘Rottweiler breeding is working dog breeding,’ which has held true for the past 80 years. The first Rottweiler entered the United States with a German immigrant in the late 1920s. The fist litter was born in 1930 and the breed has grown more and more popular over the decades.

The American Kennel Club recognized them in 1935 and the American Rottweiler Club was founded in 1971.Rottweilers should be groomed weekly. They are powerful dogs that need lots of exercise to stay in top form and so should be given long walks and opportunities to play freely several times daily. Rottweilers are not ideal dogs for an urban setting.Some common health problems associated with Rottweilers include hip and elbow dysplasia, osteochondrosis, panosteitis, parvovirus, deafness, neurological disorders, retinal problems, kidney failure, and bloat.