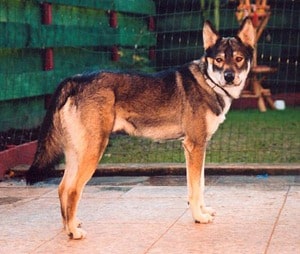 The American Indian Dog is a very old breed of dog that has survived thanks to an outstanding line of breeding and health. The American Indian Dog makes an excellent family pet, being able to adapt to many different environments with ease. They enjoy being active and playing games with all the members in their household. They are extremely agile and very obedient and loyal.

The American Indian Dog is an extremely good hunter and has been used in search and rescue. If you are looking for an excellent sled dog, then this is a dog high on the list. The qualities, which an owner can find in this dog, are innumerable. With the right care the Indian Dog can live up to 20 years old.

The American Indian Dog is often confused with the coyote because of their strong resemblances to one another. Their body shape is much like that of a dingo and they are of medium build. Dogs are generally 19 to 21 inches weighing 30 to 45 pounds and bitches are 18 to 20 inches weighing 25 to 40 pounds. Much larger dogs have also been reported.

They have thick coats that come in a variety of colors and color combinations such as black, blue, white, golden red, gray, red & tan, tan, chocolate, cream, fawn, and silver. Their long tail sometimes has a bit of white at the tip and white is not unusual on their chest and feet. Their regular shaped muzzle flows nicely into their skull and there is a slight dome between their ears.

Intelligent, medium sized, almond shaped, pale yellow, pale blue or amber colored eyes look out at you from the front of their heads. The American Indian Dog’s triangles shaped ears stand erect on the tops of their skulls but they are quite mobile. The feet of this dog are actually quite small with close, well-arched toes and sturdy nails.

DNA testing done at UCLA has shown that ancient American Indian dogs were genetically closer to dogs of the old world rather than the gray wolves of North America. This genetic testing supports the fact that the original American Indian Dogs were originally bred from dogs that were brought across the Bering Straight with human migrations at least 12,000 years ago. Here Native Americans bred these dogs with the native coyote. They were bred for their survival instincts, pack loyalty and high intelligence qualities. With all of these qualities, the American Indian Dog made an excellent guard dog, herding dog and hunting partner. Although Native Americans bred their Dogs with coyotes to maintain these qualities, today these qualities remain in the breed due to highly selective breeding for the desired traits.