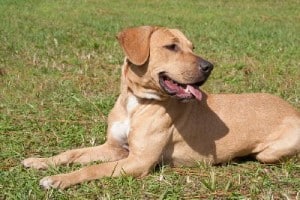 Also known as the “Southern Cur,” “Ladner Cur,” and the “Yellow Black Mouth Cur,” the Black Mouth Cur is a sturdy and muscular dog that originated in th Southern United States.

The Black Mouth Cur is a hunter’s dream dog. They can successfully hunt boar, bear, coon, squirrel and deer. They are relentless and tireless workers. They never retreat, and they are also proficient at treeing and baying. They are kind and watchful over their human family. They are loyal watchdogs and are eager to please their masters. The Black Mouth Cur is not a one-man dog. Most accept training from the entire family.

These dogs tend to be particularly protective over children in their families, and have even been known to protect children when their parents are disciplining them! Oddly enough, male Black Mouth Curs seem to prefer the company of women and children, and are very aloof with strange men. They are intelligent and even-keeled, though they will require a fair amount of training. Many breeders say that a Black Mouth Cur puppy will train himself to tree, protect, and/or pen cattle by six months of age. Many of them are also used for search and rescue and to save children from drowning.

Their coats are short and fine. Coat colors include reddish/golden yellow, fawn or sandy yellow; and will appear with or without black muzzle or mask with a small amount of white on its toes, tip of tail, and/ or chest. Their coats are easy to groom; only requiring occasional combing and brushings to remove dead and loose hairs. Their tails should be quite lengthy, though many are docked. Their chests are deep, muscular, and solid.

The Ladner Blackmouth Cur is a dog that is a native of southern Mississippi and the gulf coast area. The Ladner family, the original breeders, have been hunting with and breeding these dogs for many generations. The southern United States is well populated with other cur-type dogs that should not be confused with the Black Mouth Cur, the Kemmer Stock Mountain Cur is one such example. It was a Black Mouth Cur who played the role of “Old Yeller,” in the famous Disney movie Old Yeller.