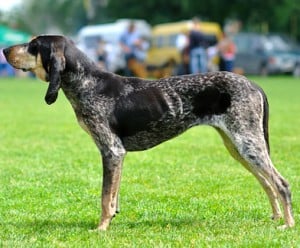 Even-tempered, of a good disposition, and intelligent, the Blue Gascogne Hound is a hard worker and an adept hunter. While working, the Blue Gascogne Hound will show tremendous stamina, devotion to assigned tasks, and determined focus. However, they are known for their “aristocratic” manner, and they may be aloof with strangers. They may also be a bit stubborn, so they may not react well to obedience training. Wanderers by nature, they should definitely be kept in a fenced in yard, and they are not recommended for city living or for inexperienced owners.

Full-grown Blue Gascogne Hound males will reach a height of 25 to 27 inches, while females will vary in between 23 and 25 inches. All Large Gascogne hounds will weigh in between 70 and 80 pounds. Their coats are distinctive, instantly recognized by their “blue” color. The blue is expressed by the appearance of black patches on white background (which happens to be speckled by black). There are several varieties of the “blue” shade. 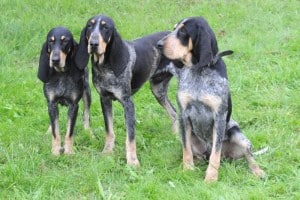 Near the center of Europe in the Middle Ages, there was an area known as “Gascogne,” and this area is now called Gascogny. This region took its name from the Basques or “vascons” who had migrated there. This is the area in which the “Bleu de Gascogne” was originally bred. The Grand Bleu was used for hunting wolf, deer and boar in France, and was famed for its ability to find and follow trails that were as much as three days old.

The Large Blue Gascogne Hound’s coat is relatively easy to care for.
This breed is relatively healthy, though some breeders have warned potential owners to look for signs of gastric torsion, a painful and sometimes fatal twisting of the dog’s bowels.