The Brazilian Mastiff, or Fila Brasileiro, is a large, athletic dog that originated in Brazil. While this breed is rapidly gaining popularity is it still relatively uncommon in many parts of the world.

Brazilian Mastiffs are good watchdogs, swimmers, and hunters. This breed is protective, yet is usually very eager to please its owner. They are friendly to their master, but by the same token they can be standoffish to any strangers who may cross their paths. They are not overly aggressive toward strangers, but are definitely protective of their owners, whom they adore. If socialized at an early age, Mastiffs can be more people friendly than they might otherwise be.

Fila Brasileiro is a very agile breed with remarkable courage, bravery, and determination. They love to spend time with their masters and tolerate children well, especially if introduced to them as pups. They are not normally disturbed by new environments or strange noises, and show a calm disposition and self-confidence unlike any other breed. Since their ancestors were big game hunters and cattle herders, they carry on these traits and love to be outdoors.

Brazilian Mastiffs have heavy, large, trapezoidal heads that are always proportionate to their bodies. Their muzzles are broad and very strong, and they have a black nose. Their eyes are medium-large size and deep-set. The eyes range in color from yellow to dark chestnut and are always consistent with the color of the Mastiff’s coat. Because they have loose skin on their faces their lower eyelids droop, giving them a rather melancholic expression, which is not looked down upon, but rather a trademark of the Mastiff. 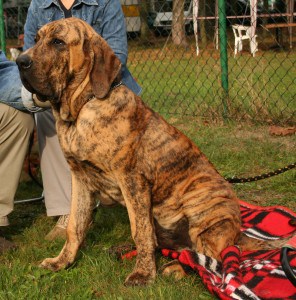 Their bodies are large and broad, covered by a loose, thick skin. Their coats are short, dense, and smooth, usually solid colors and brindles. They are usually not grey or patched, but rather striped. Brazilian Mastiffs reach a weight of up to 100 pounds, with the females weighing up to 90 pounds. They rarely are taller than 29 inches.

Fila Brasilieros were bred from English Mastiffs, Bloodhounds, and Bullenbeissers, which were dogs used for hunting and cattle herding in the early part of the 19th Century. It was easy for them to cross borders since they looked much like calves, and ran with the herds. Although their exact ancestry still remains somewhat of a mystery, they were influenced by Portuguese and English dogs.