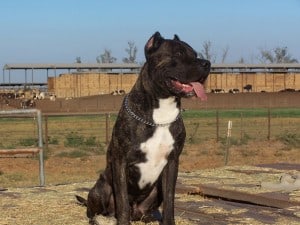 This breed originated in the Canary Islands and has been there since at least since the 16th century. It is believed that the Spanish Conquistadors and colonists originally introduced this breed. For generations, the Canary Dog has been valued as a guardian of home and cattle on the islands, and also has been used as a fighting dog. The breed nearly disappeared in the 1940’s when dog fighting was banned, but some dedicated breeders managed to save the Canary Dog, and today it is gaining recognition again.

The Canary Dog, also known as the Presa Canario, is impressive in appearance – its undaunted and fearless gaze is indicative of its temperament. Used in the past as a fighting dog, the Canary Dog is ready to take on any challenger or do anything necessary to defend its family and property. This breed is aggressive to other dogs and therefore does best when it is kept as a single dog. Although the Canary Dog is suspicious of strangers, it does not attack unprovoked.

At the same time this breed is extremely devoted and affectionate to its family, and prefers to be in close proximity to them as much as possible. The Canary Dog responds well to training, and obedience training is advised. Because of this breed’s protective tendencies, fearlessness and its great physical strength training should begin at an early age. The Canary Dog does best with a confident and experienced owner; it needs to feel that its owner is indeed its master and is in control.

A large dog standing up to 26 inches at the shoulder and weighing up to 100 pounds, the Canary Dog is very powerful and muscular, with strong bones, a very well developed chest, and a massive powerful head. The breed is related to the mastiff breeds and is similar in type. The expression is confident, fearless and penetrating. The coat is short and rough, and is colored fawn or brindle with white trim allowed. The Canary Dog’s appearance expresses its nature – bold, confident, and ready to spring into action immediately, if required.