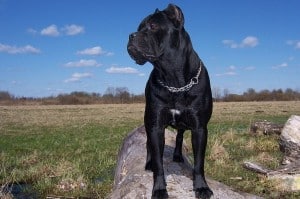 The Cane Corso, also known as the Sicilian Branchiero, or Cane di Macellaio, is a very old breed whose origins date back to the Roman Empire. This breed is distinct from the American Cane Corso. The Cane Corso is an excellent working and hunting dog, in addition to being a beloved companion. The Cane Corso is an intelligent and lively breed. As watch dogs, they are nearly unmatched. They are alert, responsive, and fierce guardians. They are calm with their owner and family, and also loving with children. They do not require large amounts of exercise making them well suited to city life as well as more rural housing.

A daily walk should be sufficient to keep the Cane Corso happy. They are easily trained, and they will courageously defend property, people, and houses. The Cane Corso is an excellent working dog, used for watch, protection, police, and track dog. They are capable of protecting not only people and property, but they also do very well as livestock guardians. Some have even record them as being good herding dogs too! In addition the Cane Corso has also been used for hunting. 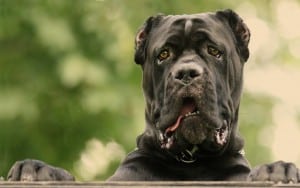 When discussing the Cane Corso it is important to make a distinction between the true Italian Cane Corso of Italy and the American Cane Corso. We will try to point out the differences in physical appearance throughout this breed description. The Cane Corso is a larger breed; the mature male Cane Corso will reach a height of 25 to 27 inches and females 24 to 25 inches. Mature males will weigh between 45 to 50 kilograms, with females slightly smaller at an average of 40 to 45 kilograms.

Another difference between the Italian Cane Corso and the American Cane Corso is that the American version is permitted to have colors never existed within the original Italian Cane Corso, coat colors include black, gray, slate, light gray, light fawn, fawn, dark fawn and “tubby” (stripes on different shades of fawn and gray). In the fawny and “tubby” Cane Corso will have a black or gray mask only on the muzzle. They also have a small white patch on their chests. Their coats are short and a bit harsh, shiny and a bit dense. It becomes thicker in the winter. 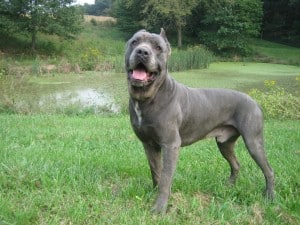 The Cane Corso’s ancestry begins with the old Roman Molossian (canis pugnax). Today’s Cane Corso can be described as a lighter version of its proud ancestor. The Cane Corso was originally used in the Roman Empire as guards of livestock. They were bred to help peasants perform everyday chores. There are several theories regarding the origin of their name, including the Greek word “Cortos,” which loosely translates as “guard.”