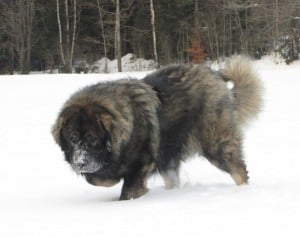 The Caucasian Mountain Dog was bred to survive in the very harsh climate and conditions of the Caucasian Mountains in Russia. Its function was as a livestock guardian. This breed is always very closely associated with its master – the Caucasian is extremely loyal and devoted. The Caucasian Mountain Dog considers the family as part of his flock, and is gentle and affectionate with both adults and children, but is totally fearless and ferocious in defending them from danger. The Caucasian, large, powerful and bear-like, is, however, calm and not quick to anger – confident in his own strength and abilities, he is capable of waiting to discern whether something is a true threat.

Intelligent and a quick learner, the Caucasian, considered a “natural” breed that has changed little over perhaps thousands of years, has very well developed senses and instincts, and can be stubborn and independent. He requires a strong and experienced handler. The Caucasian can be highly aggressive to strange dogs or anyone invading his territory or threatening his “flock”. He is a dog that requires a reasonable amount of exercise, and does not like to be confined; urban conditions are not ideal for this dog.

The Caucasian Mountain Dog is a large and strongly built dog, giving the impression of great power and endurance. They stand between 26-32 inches at the shoulder and weigh 70 to 160 lbs. In their Russian homeland, the larger they are the better! They are slightly longer in body than height and are, despite their size, athletic and muscular dogs that can move freely, steadily, and with power and great endurance, and can cover a lot of ground in very harsh conditions.

The head is a very powerful blunt wedge with well-developed muscle and powerful jaws, which is extremely important when judging these dogs in their homeland for a full and correct bite. The ears are medium sized drop ears held tight to the head; in their homeland, the ears were cropped very close to the skull to prevent them being grabbed and torn in fights with predators. The tail reaches to the hocks in repose, but is very indicative of the dog’s mood – when excited or on alert, the Caucasian may carry its tail hooked or curled above the back.

The coat of the Caucasian is very thick and weather resistant with a profuse undercoat. There are several allowed lengths from very long to medium short; the most common and preferred is medium length. There is a thick ruff and feathering on legs, buttocks and tail. The Caucasian comes in a variety of colors – various shades of agouti gray, white, cream, silver, reddish fawn or tan, brindle, piebald, or white with colored patches. White markings are present in all colors, and a black mask is common. Colors that are not allowed are solid black or brown, black and tan, red and white, or a dark undercoat. The Caucasian must give an impression of power, strength, agility and fearlessness, and the ability to fulfill his tasks under any conditions. 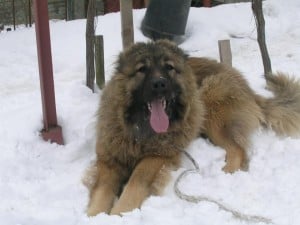 The Caucasian Mountain Dog is an ancient breed that has been used for centuries as a herd guard dog and companion by the various tribes inhabiting the Caucasus. Its origins are not documented, but it is considered to probably be a local descendent of the mastiff-like herd guardian dogs of Tibet, which are the ancestors of many of the modern herd guardian breeds. There are also those that claim that the Caucasian is a descendent of the wolves of the Caucasus. This breed’s development was dictated by the necessities of survival and function in the extremely difficult conditions of its natural environment.

It has been highly valued for generations for its fearlessness and zeal in protecting its home, family and herds. The Caucasian Mountain Dog was also bred and used by the Soviet government for guarding military installations, factories and other locations that required a serious working dog. The Caucasian should have daily exercise. The thick double coat requires weekly brushing to keep it clean and prevent matting. During the shedding season, more frequent brushing is required.Health concerns: Hip dysplasia and elbow dysplasia; breeding stock should be screened for these problems.