The Billy also known as the Chien de Franche-Comte, is an intelligent dog that has numerous abilities including hunting and tracking.
In addition to being an excellent working dog, the Billy also makes a wonderful household companion. A highly intelligent breed, the Billy is easily trained. 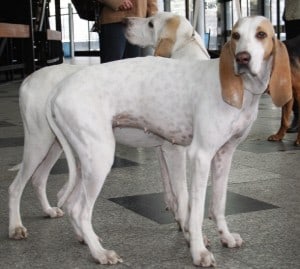 For this reason it has been used to hunt, loving in particular pack hunting deer. It should be noted that this breed is prone to aggression and fighting with other pack dogs when he is not actively hunting. This is not to say that the Billy is too aggressive to make a good pet. The Billy is a calm but active dog who is usually good with adults and children alike. In addition to hunting the Billy has been used for scenting, to this day he is used as a track hound.

A medium to large dog, with an average weight of 55 to 68 pounds at adulthood, the Billy is typically 23 to 26 inches in height. He possesses a short, hard coat, which is commonly seen in white with lemon/orange spots.

Originating in France, the Billy was named after the ‘Chateau de Billy’ where he originated. Initially created to hunt bore and deer. The originator of this breed, Monsieur Hublot du Rivault, created the Billy by crossing three, now extinct, dogs, the Larrye, Ceris, and Montaimboeuf.

Because of his short coat the Billy is often very susceptible to cold weather making him prone to bronchitis.