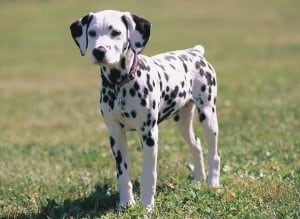 Best known as firehouse dogs and coaching dogs, the Dalmatian’s distinctive black and white spotted coat may make it one of the world’s most recognizable breeds. Throughout their history, Dalmatians have also performed as dogs of war, bird dogs, and retrievers.Dalmatians are versatile, hard-working dogs. They tend to get along with other dogs and small animals, though they should always be walked on a leash in secure areas.

Though they can adjust to rural settings, they will do best in the suburbs or country, where they have room to run around. Dalmatians are extremely affectionate and playful, though they can be a bit strong-willed. They can also be territorial and relatively aggressive or aloof with strangers. It is important that obedience and socialization begin at an early age for them. Dalmatians are an intelligent breed and can be trained to do almost anything the owner wants them to.

Dalmatians will grow to a height of 19 to 24 inches and weigh in between 45 and 65 pounds. Their coats are short, thick, fine and close lying. Their distinctive coat is white with black or liver shaded spots. Dalmatians are born solid white in color and develop their spots later. Though their coats are short, they are quite difficult to care for. They shed constantly and can leave behind white hairs all over your apartment or home. Daily grooming with a rough towel or a grooming glove will usually do. 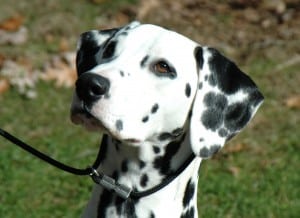 The Dalmatian was originally developed in Dalmatia, which today is located in Croatia. At the time this breed was developed Dalmatia was in Yugoslavia. Croatia declared its independence from Yugoslavia in 1991. They were brought to England during the Crusades as a hunter, but sportsmen discovered that they were better at guarding horses, carriages, and coach inhabitants. They were originally known as the “Harrier of Bengal,” and the “Danish Dog.”

Dalmatians need plenty of exercise; those that are not walked or worked daily may develop undesirable behaviors. It is also important to obtain a Dalmatian from a reputable breeder, and since one-third of all Dalmatians are deaf, future buyers should buy puppies from breeders who check for deafness. The test can be done when the puppies are seven weeks old. Other breed-related health concerns include allergies, bladder stones and urate urinary tract stones.