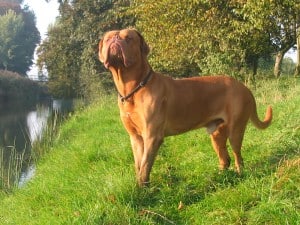 The Dogue de Bordeaux, also known as the “Bordeaux Mastiff,” and the “French Mastiff,” were originally trained to attack bulls, bears, and other dogs.The original Dogue de Bordeaux was quite fierce, though years of breeding have softened this temperament. They are brave watchdogs and guard dogs, and can be confrontational with strangers and aggressive with trespassers. Possessing a deep, intimidating bark, they will guard their home fiercely.

They can also be aggressive with other dogs, so they should begin obedience and socialization at an early age. This breed learns quickly, but they can be quite stubborn. Also, male Dogue de Bordeaux will rarely tolerate another male, and they can be somewhat territorial. As companions, they are calm and sweet, though they appear fierce and vicious.

They can do well in an apartment; they are relatively inactive indoors. It has been reported that a well-socialized Dogue de Bordeaux will be good with children. However, some are heavy droolers. It is a pricey breed – a Dogue de Bordeaux puppy may cost as much as $2000.

Mature Dogue de Bordeaux will grow to a height of 23 to 27 inches and weigh in between 80 and 100 pounds. Their coats are fine and short, soft to the touch. Coat colors are solid mahogany, and various fawns. They may also have a black or red mask. Their coats only need an occasional brushing. The skin on their necks is loose, and they have prominent dewlaps, and they are thick skinned. They may also have white marks on the tips of their toes and on the chest. They require experienced owners. 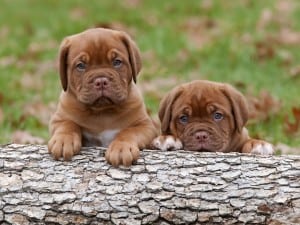 The Dogue de Bordeaux may be a descendant of ancient Molossus breeds or from French or Spanish mastiffs. They first served as war dogs, flock guardians, and as combatants in dogfights, and they were also pitted against bulls and bears. They were then used as cattle drivers and personal protectors. Luckily enough, owners cared enough about the breed to preserve the breed’s existence.

The Dogue de Bordeaux has relatively low exercise needs.The breed has quite a few breed related health concerns. These include hip dysplasia, and bloat. They are also particularly susceptible to demodex mange, they can have eye problems, dental hygiene is a must, they can have Pano (growing pains) because of rapid growth – this is quite common.