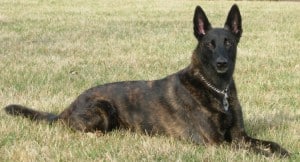 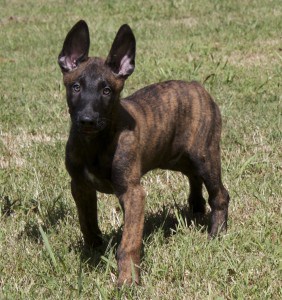 The Dutch shepherd is a medium sized dog that is about 65 to 67 pounds and is around 22 to 25 inches in height. The coat of the Dutch Shepherd comes in one of three texture varieties: longhaired, wire-haired and shorthaired. The longhair is long, straight and rather rough. It should be noted that the longhaired Dutch Shepherd is very rare. The wire-haired is, of course, wavy and is of medium length. The shorthaired is very short and dense.

It should be noted that the shorthaired Dutch Shepherd is the most commonly seen, while the wire-haired is a little more rare. Dutch Shepherds are seen in a variety of colors and color combinations of brindle including: a red or gold brindle, gray, silver, yellow and blue. The Dutch Shepherd has a rather muscular body, a deep chest, and a slightly curled tail. Interestingly, the Dutch Shepherd does not have dewclaws. The dog has dark, slanted eyes and cute ears that are pointed.

The Dutch Shepherd was originally used in the Netherlands as an all-around farm dog, performing tasks such as to guard the farm, pull carts, and herd animals. Additionally, the dog was used for general guard work as well as police and security work. In spite of being a reliable and strong worker, the Dutch Shepherd has not really gained much popularity outside of Holland. There are only about 400 dogs that are registered each year. 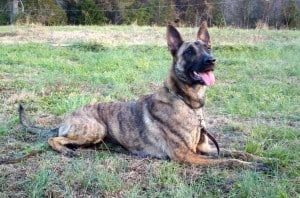