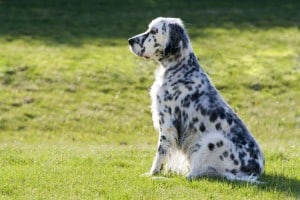 The English Setter was originally bred as a retriever and a bird-dog.English Setters are wonderful pets for families with children, dogs, other animals, or even a quiet household. They are noted for their gentle nature and smooth demeanor, but need to feel like an active member of the family. English Setters will do well in quiet households when they are given lots of exercise and plenty of attention. They respond well to firm, but gentle handling.

Their hunting instincts can make obedience training a bit difficult, even at an early age. English Setters are good pets for energetic individuals because they love to run and play. They are also remarkable pets for first time owners. In addition they seem to be comfortable almost everywhere, from the show ring to the field! English Setters may bark at strangers who come to the house, but it is meant more as a ‘hello’ than a threat. Setters do best in the country where they can run freely, and should not be kept in an apartment or the city. They are not fond of spending time alone.

Mature English Setters will grow to a height of 24 to 25 inches and weigh between 50 and 70 pounds. Their coats are flat and accented by dense feathering which gives them a dignified and powerful look when they prance around. The color is distributed in specks throughout the coat, giving them a marbled look. A dog with black specks is called a “Blue Belton,” a dog with orange specks is an “Orange Belton,” a tricolor dog is a Blue Belton with tan marks over the eyes and on the legs. 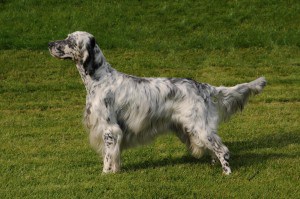 It should also be noted that there are two types of English Setters, there are the Lavarack Setters which are usually show dogs they have the longer coat and more spots and usually bigger. Then there is the Lewellins, which have shorter coat and are known to have fewer spots and to be hunters, so they are smaller.

As is true with many old breeds the exact history of the English Setter appears to be a matter of debate. This breed has been in existence since at least the 16th century; though some sources trace it back much further, into the 14th century. Surprisingly, in spite of its long history the first English Setter show was not until the mid 1800s. They were first seen in Newcastle-tyne on January 28, 1859.

The English Setter needs regular brushing twice a week to prevent tangles and matting. They should also be clipped between three and four times a year. They will also require at least daily brisk walks. When shopping for an English Setter, it is important to obtain one from a reputable breeder.Breed-related health concerns include hypothyroidism, deafness, progressive retinal atrophy, hip and elbow dysplasia and some cancers.