It should be noted that though they will often bark at the approach of strangers they are rarely aggressive. The German Shorthaired Pointer is a highly intelligent canine that has incredible energy for these reasons they require early, firm but gentle obedience training. They are unsuitable for city or apartment living, considering their need to hunt, they need to use their hunting attributes. Hardy and affectionate, they love their homes, families, and home environment, but they are truly at home when hunting . Their love hunting is backed up with great abilities in pointing, flushing, tracking and retrieving.

The German Shorthaired Pointer’s nose is so keen that like the Bloodhound he can scent in any type of weather. Their hardiness also makes it possible for them to hunt across a wide range of terrains. Accordingly they make excellent gun dogs and are very versatile hunting companions. Some of the many types of game this dog excels in hunting include; rabbits, duck, deer, quail, ducks, partridge, pheasant, pigs, foxes, rabbits and even kangaroos!

German Shorthaired Pointers will grow to a height of 21 to 25 inches and will weigh 45 to 70 pounds. Their waterproof coats are short, thick, and harsh to the touch. Coat colors include liver and white, liver. Their large eyes are deep brown, lively, and intelligent. They will need lots of exercise, and he seems more comfortable in the country. It is essential that if they are kept as family pets that they are exercised adequately or allowed to hunt occasionally. 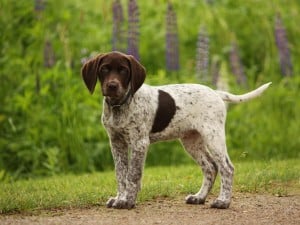 The German Shorthaired Pointer has a long history. As with many of the older breeds of dogs there is some debate as to its exact history. Originating in Germany the German Shorthaired Pointer was first developed in the 17th century by German sportsmen who desired the perfect hunting dog. (Some sources state he was developed in the 19th century, but most research indicates that it was much earlier in the 17th century).

There is some debate as to which dogs were the forefathers of the German Shorthaired Pointer. All seem to agree that the Spanish Pointer was in the originating lines, but then some state that Foxhounds and English Pointers were used, while others state that it was the Hanoverian Schweisshund that was crossed with the Spanish Pointer. They were first recognized by the AKC in the 1930s. Since the 17th century the German Shorthaired Pointer has become a favorite all over the world.

The short waterproof coat of the German Shorthaired Pointer requires little maintenance. A quick weekly brush is sufficient. Because the German Shorthaired Pointer is a highly active dog, the require a LOT of exercise. If they are not exercise they are prone to destructive behavior and or constant barking. This breed has several breed related health concerns including; subaortic stenosis, entropion, hip dysplasia, von Willebrand’s disease (a serious bleeding disorder similar to hemophilia in humans), lymphedema, and hypothyroidism.