They are usually good with children, although early socialization is essential to ensure they learn the limits. They are naturally wary of strangers, making them fairly good guard dogs. However, they are quite stubborn and independent, as well as being easily distracted, which can make obedience training difficult. Obedience training must be firm and ongoing, as the German Wirehaired Pointer can become willful.

German Wirehaired Pointers need lots of exercise and are not well suited for city life, especially in a confined dwelling such as an apartment. While they can live in a smaller yard, they are happiest where they have plenty of room to exercise and roam. German Wirehaired Pointers are able gun dogs, capable of tracking game on any terrain. They have a good nose and are quite capable of tracking, pointing and retrieving both on land and in water.

The German Wirehaired Pointer is a fairly large dog, reaching up to 26 inches in height and weighing between 45 and 70 pounds. They have a straight, coarse and wiry outercoat that reaches about two inches in length. This outer coat protects them from rough terrain. The undercoat is softer and is thick in winter and thinner in summer. Common coat colors for the German Wirehaired Pointer include solid liver, liver and white, or liver and roan. They have bushy eyebrows and a medium-length beard. Their nose is large and brown with open nostrils. 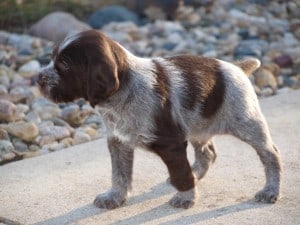 The German Wirehaired Pointer was developed by the Germans in the 19th century. The original Wirehaired Pointers were a mixture of Griffon, Stichelhaar, Pudelpointer and German Shorthair. This mixture included a variety of different types of hunting breeds, giving the Wirehaired Pointer its versatile hunting abilities. They were first imported to the United States in the 1920s, and were admitted into the AKC in 1959.