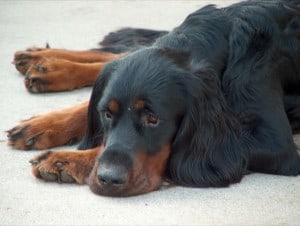 The Gordon Setter is an old breed that has a very long history as a hunting dog. This breed was used for retrieving, pointing and tracking in the 1600s, though they did not become popular hunting dogs until the 1700s, when the Duke of Gordon used this breed extensively. This breed is the largest of all the Setters.Gordon Setters are intelligent and very obedient dogs. Although very loyal to its family, tends to be standoffish with strangers. This is not to say that the Gordon Setter is a mean dog, in fact it is one of the most intelligent and gentle dogs that any owner with children could want.

The Gordon Setter may have some trouble getting along well with other dogs but tends to get along well with other animals. If the Gordon Setter is exposed to a wide variety of different surroundings with a wide variety of people and animals then acclimating it should not be a problem at all. Early obedience training is a must for this highly intelligent animal and they will learn best with positive reinforcement.

The Gordon Setter is one of most elegant and streamlined dogs of its type. Males typically reach a height of 24 to 27 inches and weigh 55 to 80 pounds. Females will reach a height of 23 to 26 inches and will weigh in somewhere between 45 and 70 pounds. They have dark brown and round eyes which are characteristic of the breed. Their muzzle is fairly lengthy, it measures about the same as their deep skull. The coat of the Gordon Setter is straight with a little bit of a wave and is known to be very soft and shiny.

Long hair is on the ears, stomach, chest, backs of the legs and on the tail. For the most part the coat of the Gordon Setter is black in color with tan markings. These markings appear in mahogany or chestnut coloration. The markings appear in a few typical places. There are two spots over their eyes and markings on the side of their muzzle. There are also two very distinct spots on their chest and throat. The insides of the hind legs and forelegs are tan, reaching all the way down to the toes, and sometimes there is also a spot of white on the chest of the Gordon Setter. 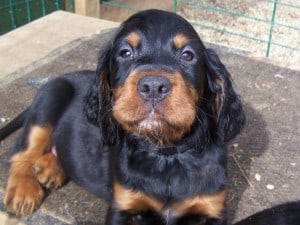 The Gordon Setter was originally bred in the 1600s. A Black Pointer and a Black and Tan Castle Dog are thought to be the original breeding pair that this modern breed was derived from. A less popular theory is that the breed developed as the result of the breeding of a gundog and a Collie. The Gordon Setter is the largest of all three Setter breeds. It was an excellent dog for hunting all day and in all kinds of weather, pointing, tracking, and flushing. The high endurance, intelligence and loyalty which this breed displayed over 200 years ago making it an excellent choice for owners and an appreciated pet to own.

Gordon Setters’ coats should be brushed a few times a week and they should receive regular and daily exercise such as walks, hikes and jogs. The Gordon Setter has breed related health concerns such as hypothyroidism, hip dysplasia, progressive retinal atrophy, epilepsy, and cerebellar cortical abiotrophy (which causes degeneration of cells in the cerebellum).