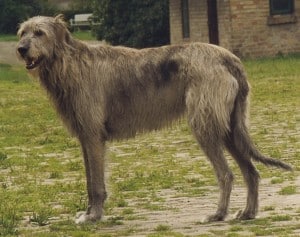 The Irish Wolfhound is the National Dog of Ireland. This is an ancient breed that has been in existence in Ireland since before the Christians arrived.The Irish Wolfhound is a companionable animal. They are very affectionate towards their family and are good with children and are generally quite friendly, though some may be somewhat reserved around strangers. In return for this affection, however, they require a great deal of attention and love.

Irish Wolfhounds are best suited for suburban or rural regions where they can get enough exercise. They should not be left alone for long periods of time, as this can make them timid and destructive. Irish Wolfhounds should be socialized to other animals, children and strangers at an early age to ensure that they are not overly cautious. This breed is happiest when surrounded by its family, to whom it is exceptionally devoted.

Although the Irish Wolfhound is trainable, they are not particularly easy to train. It is necessary that training be done patiently and gently.The Irish Wolfhound is a very large animal, reaching an average of 34 inches (per the AKC standard) in height and weighing as much as 120 pounds. Larger dogs are not uncommon. They have a wiry, rough coat that usually appears in shades of gray, brindle, black, white, fawn and red.In its native Ireland, the Irish Wolfhound is well known for its ability to bring down large game such as wolf, boar and Irish Elk. In 391 BC, several Irish Wolfhound were brought by Celts to Rome, where the Romans gazed on the animals in wonder. 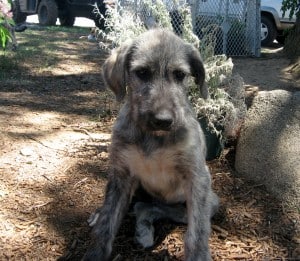 The Irish Wolfhound is likely related to the Scottish Deerhound. In 1658, Oliver Cromwell banned the exportation of Irish Wolfhounds off the British Isles as the dog was becoming more rare. When the Wolf disappeared from Scotland and Ireland in the 1700s, the Wolfhound became nearly extinct. In 1862, the breed was revived when Captain George Graham crossed surviving dogs with Scottish Deerhounds and other animals. The Irish Wolfhound is today the mascot of the Irish Guards, and has been since Captain Graham selected the first mascot in 1902.