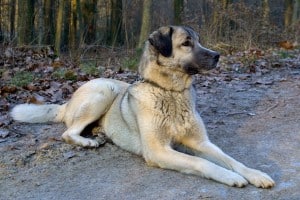 The Kangal Dog is indigenous to the Sivas-Kangal region of eastern Turkey, historically an intensive sheep-producing culture. The region is characterized by rolling mountains planted in crops such as barley, and high plateaus called “yayla” on which the sheep graze during the summer.

Over the centuries, sheep herding villagers have developed the Kangal Dog breed into the beautiful, formidable, and intelligent animal that it is today. The Kangal Dog is a livestock guardian breed; that is, its job is to bond to a flock of sheep or goats and guard them from predators. They will also guard their owner’s other possessions–including donkeys, poultry, houses, vehicles, and territory–from human or animal intruders. They patrol their territory at a smooth, steady pace that reminds one very much of a stalking lion.

The Kangal Dog is generally a calm, mellow dog during the day when there is no threat in the environment. At night, or when there are dangers perceived, they are on the alert and quick to sound the alarm–or give chase. Like all livestock guardian breeds, Kangal Dogs tend to be naturally territorial and dog aggressive unless trained well. Generally their protectiveness is directed at other large dogs and wild predators.

Kangal Dogs will protect against intruders at night, but accept visitors graciously, and most are as gentle and tolerant with children as they are with “their” newborn lambs. Kangal Dogs are very intelligent animals, but they require an owner who is committed to training in a positive, motivational, but firm manner. They are not a good choice for competition obedience, because they do not enjoy repetitive exercises. 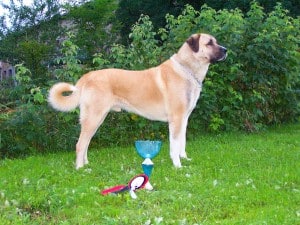 However, they learn quickly and can become fine canine citizens with regular training.The Kangal Dog has a medium-short, dense coat with a base color of cream to light tan. The coat pattern is genetically sable, and thus there are varying amounts of black or black-tipped hairs in the coat, especially around the legs, chest, and head. Depending on the number of black hairs, dogs can range from “clear fawn” with few black hairs, to an overall grayish color caused by many more black hairs in the coat.

The lighter colors with less sabling are predominant in the breed. Kangal Dogs always have a black mask and ears, with black “commas” above the eyes, as are so often found on other masked breeds. Kangal Dogs do not come in any other colors or patterns. White markings are generally limited to feet, chin, and chest spot. While miss markings can occur, excessive white spotting is undesirable because in can indicate crossbreeding.

This is also true of non-Kangal colors and patterns; brindle, pinto, as well as colors like blue, red, brown, white, and black are found in pariah dogs and sighthounds throughout Turkey, and therefore are not accepted by most villagers for working or breeding.It is interesting to note that the coat color of Kangal Dogs matches the pattern of the Kangal Karaman sheep that are predominant in their native region. Whether there is a causal relationship behind this has not been determined, but it is known that sheep are pattern-sensitive themselves, and so might be more at ease with a dog that looks more like them. 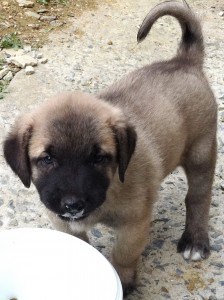 Furthermore, the distinctive coat of the Kangal Dog differentiates it from street dogs and crossbreeds that are common along the fringes of sheep-intensive areas, and thus villagers might have selected the characteristic fawn/masked dogs over the centuries as a means of maintaining the breed’s purity and famed working ability.

There may be other practical reasons for the distinctive Kangal look, but the fact is that the fawn, black masked Kangal Dog was established a very long time ago is still maintained in Turkey today. The Turkish government considers the Kangal Dog to be a historical national treasure, and there is an annual Kangal Dog Festival held amid much fanfare in the town of Kangal.

Kangal Dogs shed twice a year, and because they have a double coat, copious amounts of hair can be produced. They need to be brushed out regularly. Kangal Dogs do not eat much relative to their size, but will need a good quality diet and must never be allowed to accumulate fat. Working dogs with acres of space will patrol and exercise themselves; companion dogs must be exercised with regular brisk walking or jogging.

Future generations must be carefully bred to preserve the characteristic working dog temperament and conformation, while improving structural health. They are in general strong and hardy dogs, and for such a large breed, they have quite a long lifespan (11 to 14 years). They are generally quite fertile, and produce healthy litters of 6-10 puppies.