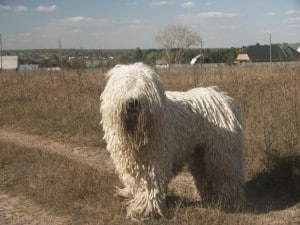 The Komondor, as it is today, developed in Hungary. It is believed that today’s Komondor is related to Tibetan dogs that were brought to Hungary by the Magyars over a thousand years ago. These ancient dogs were used primarily, as today’s Komondors are, to guard sheep.The Komondor is a large, powerful dog with a unique, corded coat. They make good watch and guard dogs, and are more suited to work than companionship. Although the Komondor can make a good family pet if socialized at a very young, they are generally independent, aloof animals. Komondorok (the plural) require a lot of obedience training to ensure that they are aware who is boss. They bond very strongly to their family and are very protective.

Komondorok can be good with children if socialized to them as pups, as they are very playful. However, because of their sheer power, they should be very well supervised when in the company of small children. Komondorok will be very protective of children in their family but may be aggressive towards other children, as with strangers. A Komondor can live with other animals if socialized to them while young. However, because of their instinctive guarding and herding nature, they may be rather domineering to other animals. 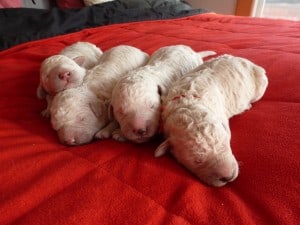 The Komondor is quite happy living outdoors in a doghouse, although they can be kept indoors as well. They are not recommended for apartments. If a Komondor can’t live on a sheep farm, they should live in the country, in a house with a large, fenced yard. The Komondor, although it can be a family companion if socialized properly, is best suited for work. If it must be a companion, the Komondor is happiest with only one master.

A very large animal, the Komondor can reach up to 30 inches in height and weigh as much as 120 pounds. This large size is further accented by their unique, corded coat. All Komondors have a white coat that, as pups, is soft and fluffy. Around three or four months, the coarse outercoat begins to mix with the soft undercoat, forming felted cords that can reach up to 11 inches in length. The Komondor has a large head with a short muzzle and dark brown eyes. Its ears hang down and blend with the coat. 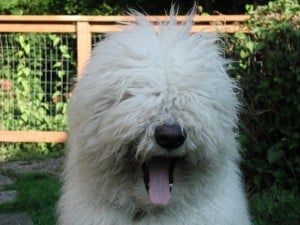 The Komondor has massive bones and a muscular body, with power that enables it to fight off anything that may threaten its flock.The earliest written record of the Komondor dates from the 16th century. The Komondor did not leave its native Hungary until the 1920s, when they began to be displayed in dog shows. All major kennel clubs recognize the Komondor.

The Komondor should be bathed, including a shampoo, monthly. The corded coat is quite absorbent (much like a mop) and can smell quite a bit. The Komondor takes several days to dry. The Komondor’s cords should be separated weekly, which could take as much as two hours. The cords should be trimmed a couple of times a year.Some common health problems associated with the Komondor include hip dysplasia, skin infections and allergies, cysts, and bloat.