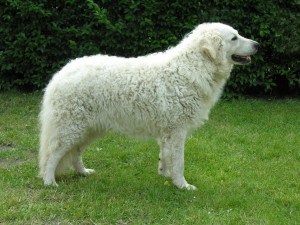 The Kuvasz originated in Hungary. The name “Kuvasz” comes from the Sumerian word “Kuassa,” which means “dog horse.” They are descended from the Komondor, a Russian breed brought to Hungary by the Huns.The Kuvasz is a large, protective dog that originated in Hungary. They are independent, yet trainable, and make excellent guard dogs. The Kuvasz is not recommended for inexperienced dog owners. The Kuvasz was originally and is still, to some extent, used as a livestock guard. It retains its protective instincts and bonds very closely to its family.

The Kuvasz is not a particularly affectionate dog, even to its family, and is quite reserved around strangers. The Kuvasz can be aggressive towards strangers and other animals and so should be socialized at a young age. It is particularly important to socialize a Kuvasz to handling by strangers. The Kuvasz is very protective of its family’s children (although it must socialized to them, as well) but should not be left alone with unfamiliar children. Because the Kuvasz was primarily used to guard livestock, it can do well with other animals if well socialized to them as a pup. 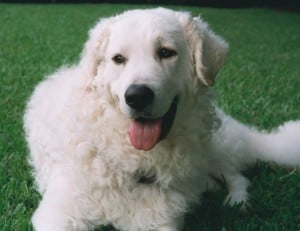 The amount of shedding depends on the climate; in colder climates, the Kuvasz sheds less. Its absorbent coat may become smelly if the dog is not bathed occasionally. Kuvaszok (the plural) should not be kept in apartments or other urban environments, as they need lots of space to exercise. They should not be left tied outside, which could lead to viciousness. Kuvaszok do best in cooler climates.

The Kuvasz is a very large, attractive breed. They stand up to 30 inches in height and weigh between 70 and 115 pounds, depending on the sex. They have a double coat, with a coarse outercoat that ranges from very wavy to straight, and they have a fine undercoat. Kuvasz are usually pure white, although cream colors are possible as well. The skin is heavily pigmented, usually slate gray or black. 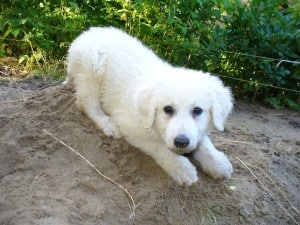 Ancient Sumerians have records of Kuassa dogs that guarded horses and their riders. While today’s Kuvasz is related to these dogs, it is somewhat smaller. In Turkish, the dog’s name means “protector.” They were kept by King Matthias, in the 15th century, who often gave the dogs as gifts to visiting nobility. After the death of the king, the Kuvasz returned to its original use as a livestock guard. As with many breeds, World War II led to the destruction of many Kuvaszok. After the war, only about 30 of the dogs remained.

Dedicated breeders have attempted to revive the breed. Today they are used as companions and guardians of both home and livestock. They are recognized by all major kennel clubs.Kuvaszok require lots of exercise, including long walks on leash and opportunities to run off leash.Some common health concerns associated with the Kuvasz include hip dysplasia, deafness, osteochondritis dissecans, bloat, hypertrophic osteodystrophy, skin problems, and allergic reactions.