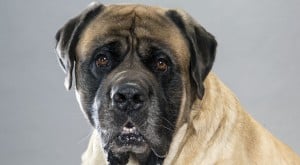 Historically, Mastiffs have been hunters, guards, and fight dogs, though today the Mastiff is seen most often as a companion. Also known as the “Old English Mastiff,” it is one of the largest breeds of dog in the world.They are large, powerful dogs and they are quite courageous. The Mastiff is an excellent guard dog, and is gentle and affectionate with its human family. A mastiff is a large, noble breed of dog. Though their size may intimidate, Mastiffs are known as “gentle giants,” and properly bred and trained mastiffs are have a good-natured disposition.

Mastiffs thrive on companionship and should be included in family activities. Mastiffs love children and will also get along with other animals. They can be stubborn, but they will be obedient if handled with patience. They are friendly with strangers, but are also protective of their territory. The Mastiff should be walked regularly. But it is important to remember that over-excercise, particularly before the age of 2 can lead to major health problems in this breed.

Mastiffs will grow to heights in between 27 and 33 inches, and though some will weigh as little as 130 pounds, larger Mastiffs may weigh as much as 220 pounds. Their outer coats are straight, short, and coarse. Its undercoat is thick and short. Acceptable coat colors for the Mastiff are “fawn,” “apricot,” and “brindle,” and its muzzle, ears, and nose should be darker than its body. They may have a small patch of white on their chests. The Mastiff has a massive body, large head, and broad chest. Males tend to be larger and heavier than females. 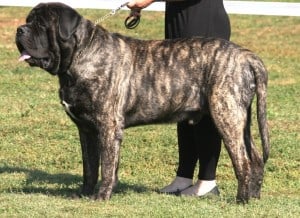 Mild-mannered, playful, and loyal, Mastiffs make wonderful pets for people who love big, playful dogs.This breed can be prone to ectropion, bloat, and hip and elbow dysplasia. They do not generally require daily brushing, once a week should be sufficient. They require long walks as well as time to run and play. Exercise needs to be moderate till at least the age of two, even though these dogs get large rapidly.

Their rapid growth is part of reason stress on their joints and bones needs to be limited. Many newcomers to this breed make the mistake of over exercising and over feeding their young dogs. This breed needs to be kept thin until at least the age of two. Overfeeding and allowing dogs to become overweight in addition to over-exercise at a young age leads to health problems in mastiffs. This breed gets quite large, and unfortunately over feeding can be a major problem wtih this breed.