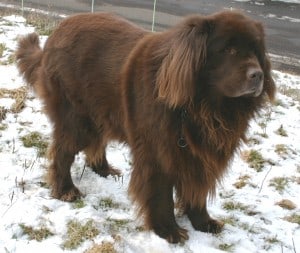 In 1919, a Newfoundland won a medal for pulling a lifeboat carrying 20 people to shore. Today, all major kennel clubs recognize Newfoundlands.The Newfoundland is a gentle giant among dogs. They are friendly and affectionate, but their large size makes them pets that require a great deal of devotion. Newfoundlands make good guard dogs and great companions for families with the time and energy to take care of them properly. A devoted companion, the Newfoundland makes a great friend for children and adults alike.

They are very affectionate and loyal. They also have a deep bark which, coupled with their extraordinary size, makes them excellent guard dogs. Newfoundlands are not without problems, however. Their affectionate nature makes them desire to be with their family always, while their large size makes this difficult. The Newfoundland is not the ideal pet for someone who is overly proud of his or her home. Because of their loose lips,which allow them to breathe while carrying something in water, Newfoundlands tend to drool a lot.

If they are neglected and left alone too much, they can become quite destructive. Today, Newfoundlands are primarily companion animals,although they are also adept swimmers and have rescued many people from water. They are quite willing to work at home, as well. The Newfoundland is responsive to obedience training and, besides being a successful competitor, also enjoys pulling carts that could contain leaves or firewood. 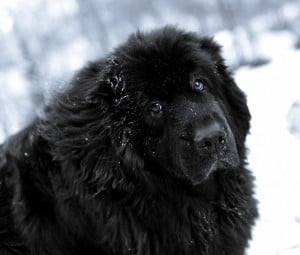 The Newfoundland is not the ideal dog for people who do not have the time or patience to care for it. They do well in all climates, but should not be confined in an apartment or other small dwelling. The prospective owner of a Newfoundland should be sure to spend time with adults of the breed, so that they are sure that this giant is the dog they want.

The Newfoundland is a very large dog, reaching up to 28 inches in height and weighing as much as 150 pounds. They have a water-resistant double coat that lies flat against the body. The outer coat is medium length and thick, either straight or wavy, and coarse in texture. The undercoat is thick (thinner is summer) and soft. Most Newfoundlands are black. Brown and gray are other naturally occurring colors but only about 2 – 5 % of each color variation is seen naturally.

Black, brown and gray may appear as solid colors or solid colors with white on either or all of the chin, chest, toes, and tip of tail. The Landseer color variation (named after Sir Edwin Landseer, an artist who featured this type of Newfoundland in many paintings) has a white base coat with black markings. The head is generally solid black or black with white on the muzzle and may or may not have a blaze, which is a white stripe extending from the muzzle between the eyes onto the head.

There is a separate black saddle and black on the rump extending onto a white tail. The white should be clear or white with very little black ticking. Newfoundlands have numerous adaptations that make them good swimmers. Their ears drop to keep out water, and they have very loose upper lips that, as mentioned above, enable them to breathe while carrying something in water. 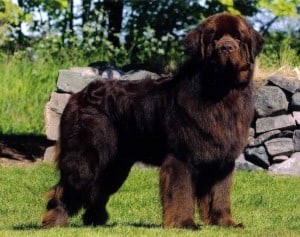 Newfoundlands also have entirely webbed feet. They swim breaststroke, rather than dog paddle.The Newfoundland originated, as the name would suggest, in Newfoundland. The exact origin of the breed is unknown. Some believe that they are related to the Great Pyrenees, dogs brought to Newfoundland by Basque Fisherman.