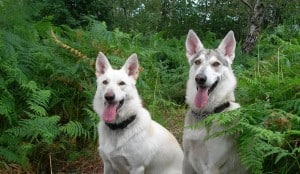 Although the Northern Inuit looks like a wolf it is not a wolf, nor is it a wolf-hybrid.The Northern Inuit has been bred for its gentle, sweet nature; and despite its wolfish appearance, these beautiful animals make better family pets than guard dogs. The Northern Inuit is a very large dog who seems to believe it is a lap dog. These animals have very sweet natures and make good children’s pets.

They bond very strongly with their families and are quite intelligent, quickly picking up housebreaking and basic training! Northern Inuit dogs can be used as working dogs or as family pets. Because of their rather non-aggressive temperaments, they generally do not make good guard dogs.

Also, Northern Inuits tend to be more quiet than other dogs of their size, making them more appropriate for family life.The Northern Inuit ranges in grizzled colors from black and grey, to buff, agouti, and tan. They may also be solid white or black in color. These dogs have thick fur and pricked ears. Their eyes are almond shaped and dark amber or yellow. Their faces should have a solid colored “mask”.

Northern Inuit dogs have shorter, broader muzzles than other wolf-type breeds. They have long legs and narrow chests and move with a wolf-like loping pace. Northern Inuit dogs have double coats, and their necks are insulated with a “mane” of fur. These dogs are quite large and look like sleek, well groomed wolves! Males weigh around 75 pounds and females are a little smaller. They usually stand between 24 and 32 inches at the shoulders. 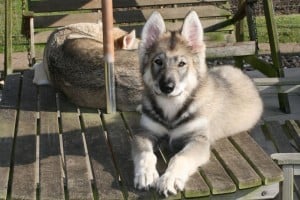 Although Northern Inuits look very much like wolves or wolf hybrids, they are not. They were developed in the United Kingdom from domestic sled and working dogs and have been bred for their temperaments and healthy, hardy dispositions. Generally Northern Inuit dogs do not show genetic defects because of the careful breeding that has gone into the development of their breed. Although it has been around for more than a decade, the Northern Inuit has only been known to the world at large for about half of that time.

Although it is not yet officially recognized by breed organizations in the United Kingdom, the Northern Inuit continues to gain in popularity and anyone who knows the breed is not surprised by this!Because of its sweet and quiet nature, the Northern Inuit generally does do not do well in the capacity of a guard dog.Because it is such a new breed, Northern Inuits are not being bred by many people, and the line remains very pure and free of genetic defects. These dogs reach sexual maturity between 18 and 24 months of age.