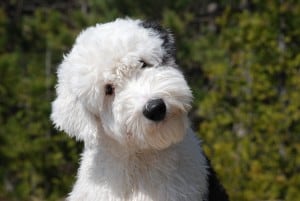 The easygoing Old English Sheepdog was originally used to herd livestock. It was developed in the southern and western regions of England.The Old English Sheepdog, also known as the “Bobtail”, is a large, friendly breed that has enjoyed much popularity with dog lovers all over the world. They are good with children and can be good with other animals if socialized with them from an early age. 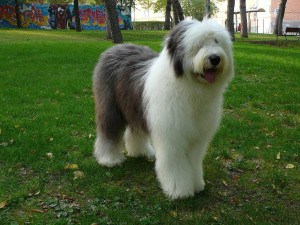 A rather large breed, the Old English Sheepdog can reach 25 inches in height and weigh up to 80 pounds. They have a long, thick and shaggy outer coat with a thick, waterproof undercoat. Old English Sheepdog’s coats are usually gray, blue, or blue merle, with or without white markings. The coat is amazingly profuse and requires quite a bit of care. They have a sturdy body and a shuffling walk that resembles that of a bear. 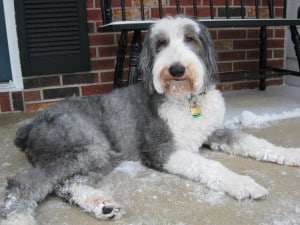 By the mid 19th century, the rate of taxation had been fixed at seven shilling and sixpence, but sheepdogs were exempt provided they had no tails. Because so many people docked the tails of their sheepdogs to avoid the tax, the breed gained the nickname “Bobtail.” Old English Sheepdogs are no longer used to herd or drive livestock, but they remain popular both as pets and in the show ring. The Old English Sheepdog was first shown in 1873 at the Birmingham Show. The first breed club was founded in 1888.