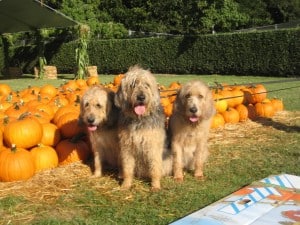 The Otterhound, also known as the Wetterhound or Dutch Spaniel, is a large, active breed traditionally used to hunt otters and other water animals.Otterhounds are friendly, energetic animals. Their energy can be detrimental, as they tend to bark and bay excessively. The Otterhound is a stubborn, independent animal that can be difficult to train.

They do well with other animals, especially dogs, although they may chase smaller animals. Otterhounds are quite friendly towards children. Otterhounds are not good dogs for inexperienced owners. Otterhounds need lots of room to explore and exercise. Therefore, individuals who live in apartments or urban environments should not own Otterhounds. 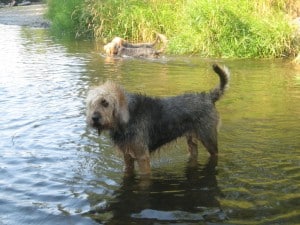 A large dog, the Otterhound can reach up to 24 inches in height and weigh up to 44 pounds. They have a thick, curly outer coat and a water-resistant, wooly undercoat. Otterhounds appear in all colors, with gray, black and tan, blue and white and shades of tan being most common. The Otterhound has a large head and its ears hang close to the cheeks. They have a broad chest and powerful legs. Otterhounds have webbed feet, which makes them adept at swimming.

The Otterhound was developed in the Dutch province of Friesland; primarily to hunt the otters that were depleting streams of fish needed by monasteries. The Otterhound most likely descended from the Bloodhound, various English hounds, and the French Griffon. The Otterhound has been in existence since the 1300s. Its Dutch name is “Wetterhound,” which means “Water Hound.” 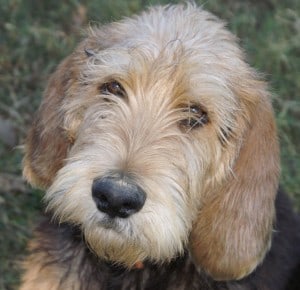 The Otterhound hunted in packs. Most otter hunting was done by nobility, and many English kings and queens owned packs of Otterhounds. Otter hunting, while never extraordinarily popular, was common until World War II. It was most popular during the 19th century. In 1978, when the otter was placed on the endangered species list, many packs of Otterhounds died out.

Today, the breed is still quite rare, although two packs (the Kendal and the Dumfriesshire) remain on the British Isles.The Otterhound should be brushed daily to keep its coat from matting. Otterhounds require a great deal or exercise, including daily walks and opportunities to roam free in a secure area. They should also be given frequent opportunities to swim.Some common health problems associated with the Otterhound include hip and elbow dysplasia, canine thrombocytopathy, and bloat.