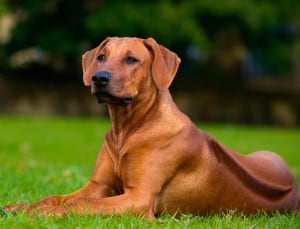 The Rhodesian Ridgeback was originally bred South Africa. Though it gets its name because it was used extensively in Rhodesia (now Zimbabwe) for lion hunting.The Rhodesian Ridgeback, also known as the African Lion Dog, is a moderately large dog that makes a good pet, for the experienced dog owner. Ridgebacks are fairly receptive to obedience training, but it is essential that training begin early.

Ridgebacks will tolerate other animals in the home provided they are socialized at a young age. They also need to be socialized around children. Young Ridgebacks should be carefully supervised around children. Although they are generally quite affectionate towards children, young and boisterous dogs may accidentally harm a small child. Ridgebacks are cautious of strangers and therefore make good watchdogs. 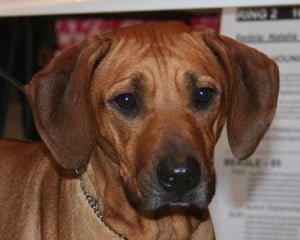 The Rhodesian Ridgeback is an intelligent, outgoing, independent dog. Because of their potentially large size and somewhat aggressive nature, it is necessary to begin training at a very young age. A properly trained Ridgeback makes a good watchdog and a great companion. They are very active animals when young, although they mellow significantly with age. Because Ridgebacks do need lots of exercise, they are not well suited to urban environments. 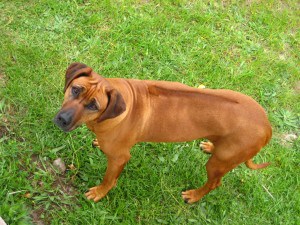 The Rhodesian Ridgeback is descended from the Hottentot “ridged” dog, native to the region, and various Mastiffs, Greyhounds, Bloodhounds and Salukis brought by the Dutch and German colonists. The Ridgeback was used by the colonists to hunt large game, including lions (hence the name “African Lion Dog”), and to guard the settlements. They were bred to be able to tolerate extreme temperatures, and to be companions to the hunters. In 1875, a visiting hunter was lent a pair of Ridgebacks for a big game hunting trip. He returned home singing the praises of the breed, and the Ridgeback soon became quite popular.

The first Ridgeback club was formed by breeders in Africa in 1922. The first American club was organized in 1948, and the breed was accepted by the American Kennel Club in 1955. Because of its short, smooth coat, the Rhodesian Ridgeback requires little grooming. However, they do need exercise daily. They also must receive obedience training.Some common health problems associated with the Rhodesian Ridgeback include hip and elbow dysplasia, thyroid problems, dermoid sinus and cataracts.