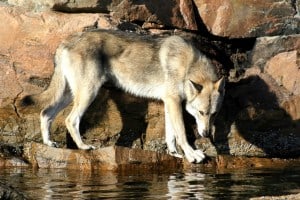 The Saarloos Wolfhound was developed in the Netherlands in the 1940’s. Leendaert Saarloos, a Dutch geneticist, developed the breed by crossing German Shepherd dogs with wolves. His goal was to produce a breed with the positive characteristics of the German Shepherd, but without the health problems. Initially, the breed was difficult to manage due to an overly shy temperament, but careful breeding in the Netherlands over the years has managed to stabilize the breed.The Saarloos Wolfhound not only looks very much like a wolf, but also retains some wolfish behavior patterns in a much more manageable package.

The Saarloos Wolfhound is extremely loyal to its master, with a tendency to become especially attached to one person. It is rather shy of strangers and uncomfortable in unfamiliar surroundings, characteristics that the Saarloos has inherited from its wolf ancestors. It is quite independent by nature, but as an animal that prefers to live as part of a pack (which may consist of additional dogs as well as humans), the Saarloos is ready to accept the leadership of its master, and is amenable to training. The Saarloos is not a hyperactive dog; like many animals that are relatively close to the wild.

It conserves its energy for when it is needed. The Saarloos is a strong and fit dog, however, that is capable of a good deal of activity when necessary. Not aggressive as a rule to other dogs or to people, the Saarloos has very keen senses and is highly alert, and therefore can be a very effective watchdog. It is not noisy. One interesting characteristic is the tendency of the Saarloos to pace back and forth in his territory, another legacy from its wolf ancestry. 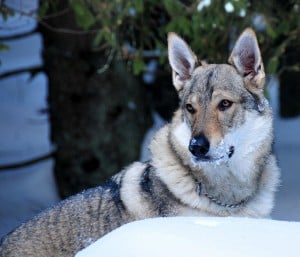 Due to its natural suspiciousness and dislike of the unfamiliar, the Saarloos does best in country or suburban surroundings rather than in the city.The Saarloos is a fairly large dog, standing up to 30 inches at the shoulder and weighing up to 100 lbs. It is an athletic dog in build, with medium bone, and a strong and muscular body. The Saarloos comes in wolf colors – agouti, wolf gray or brown, with a small amount of white allowed. Its coat is short, harsh and dense and provides excellent protection from the weather.

The Saarloos is quite wolf-like in head and expression. Its movement is smooth, powerful, and ground covering.The Saarloos Wolfhound has begun to gain some popularity in Europe. The Dutch Kennel Club recognized the breed in 1975. It is FCI recognized, but is not yet recognized by the AKC in the United States.The Saarloos is basically a healthy dog without major health concerns. It does not require special care. Brushing once a week is advised to keep the coat in good condition. The Saarloos also enjoys daily exercise and being out in the open.