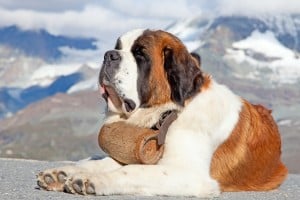 Saint Bernards have a long history. The ancestry of the Saint Bernard is unknown, but it is most likely that they descended from the Molussus dogs kept by the Roman armies who invaded during the first two centuries A.D., and a variety of native breeds. Saint Bernards are famous for rescuing stranded travelers in the Swiss Alps, especially those dogs kept by the Archdeacon Bernard de Menthon who kept a Hospice in the Alps in A.D. 1050. 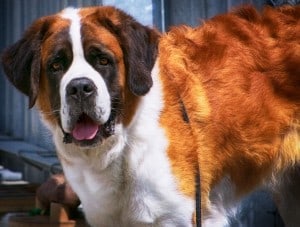 Saint Bernards need lots of room and lots of exercise, and therefore, are not well suited for urban environments. Saint Bernards are not suitable for inexperienced dog owners but they make great pets for families with plenty of room and time. Prospective Saint Bernard owners must be sure to acquire their animals from reputable Breeders. Because the breed is quite popular, pet stores and backyard breeders are breeding dogs for the money, without making sure the dogs are happy and healthy.

Saint Bernards are large dogs. They reach between 25 and 30 inches in height and can weigh as much as 200 pounds. There are two varieties of Saint Bernard: the shorthaired, with a short, thick coat and the longhaired with a longer, wavy coat. In both varieties, the coat is red and white or brindle and white. Darker colors on the face are common. Saint Bernards have very large, powerful heads with floppy ears. Saint Bernards have powerful legs and a deep, broad chest.Besides being used to rescue travelers, the Saint Bernard was also adept at guarding flocks and homes on Swiss dairy farms, as well as being useful for pulling carts. 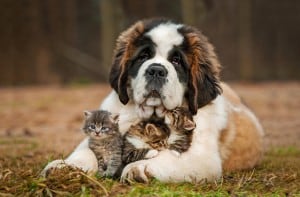 It is likely that monks brought the dogs back from the valley in which they originated, first as companions and then to work. The most famous Saint Bernard in history was Barry, a dog who rescued 40 people between 1800 and 1810. After Barry died, the hospice that was home to the Saint Bernard kennel suffered and they brought in other bloodlines to replenish the line. Crossbreeding with Newfoundlands and other dogs increased the size of the hospice dog to what is more common today, as well as producing the longhaired variety.

In 1888, the Saint Bernard Club of America was organized.Because of their massive size, Saint Bernards are quite prone to both hip and elbow dysplasia. Other problems include lymphoma, bloat, epilepsy, hemophilia, cardiomyopathy, eye problems, osteochondritis dissecans, and osteosarcoma.Saint Bernards need a great deal of exercise, although (like many humans) it is sometimes hard to convince them to exercise. Both the longhaired and shorthaired Saint Bernard should be brushed weekly.