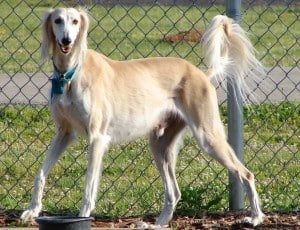 One of the oldest breeds of dogs in existence, the Saluki existed as early as 329 B.C. The word ‘Saluk’ means ‘hound’ in Arabic. The Saluki breed was developed by the Bedouin people and was considered quite sacred. They were never sold, but were often given to visiting royalty as gifts.Salukis are not particularly affectionate or playful, but they do bond with a family for life. They are cautious towards strangers and can be socialized to the company of children and other animals. Salukis were originally used to hunt gazelle in the Middle East, an instinct that remains with them.

For this reason, they should not be let off-leash in unsecured areas, as they tend to chase cats and other small animals. However, if a Saluki is raised with cats this instinct can be curbed. Salukis generally get along well with other dogs. The Saluki is quite timid around strangers, and should be supervised around very young children. However, they are gentle animals and do well with children over about eight years of age. Because Salukis are largish dogs that require a great deal of exercise, they do best in suburban or rural areas.

The Saluki is an interesting looking dog that resembles the Greyhound in stature, hence the name ‘Persian Greyhound.’ They are quite large; reaching up to about 28 inches in height, yet are rather lean. Salukis only weigh between 40 and 60 pounds, on average. Two varieties of Salukis exist. One type has feathering on the ears and legs; the other has no feathering. In both types, common coat colors are fawn, cream, white, golden, grizzle, tan, red, black and tan, or tricolor. The Saluki’s coat is soft and silky. 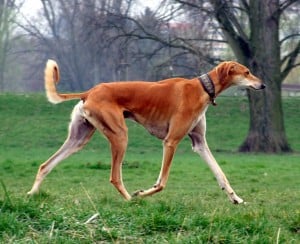 The Saluki originated in the Middle East; most likely in Persia (now Iran), but dogs were also found in India, Afghanistan and Russia. Salukis were used for hunting in difficult terrain because of their outstanding agility. They could follow falcons in the air, and were often used to hunt the speedy gazelle and desert fox. Salukis were unknown in England until the 1880s and did not become popular until World War I. The American Kennel Club recognized the breed in 1927.

The Saluki is also known as the Arabian Hound, Gazelle Hound, and the Persian Greyhound.Salukis should be brushed once a week and exercised a significant amount daily. They can be allowed off the leash, in large secure areas, but should be kept on the leash at all other times.Some common health problems associated with the Saluki breed include progressive retinal atrophy and hypothyroidism.