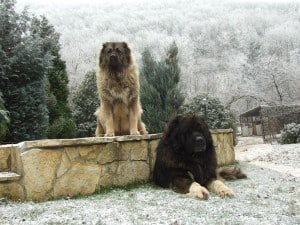 The Sarplaninac has been guarding livestock for thousands of years. It originated in the mountains of southeastern Yugoslavia, formerly known as Illyria. The name Sarplaninac comes from the Sharplanina mountain range from which they originate.Because the Sarplaninac was usually used to guard livestock, it makes a great watchdog or guard dog today. The Sarplaninac is very protective of its home and family, and therefore, is fairly cautious of strangers.

It is a very strong breed, as well as being very intelligent and independent. The Sarplaninac is a courageous dog that will not back down from any foe. However, they are lovable and devoted to those they consider family. In sum the Sarplaninac is loyal and devoted to its family and cautious towards strangers, fairly easy to train, and very protective.According to the Continental Kennel Club’s Standards the Sarplaninac reaches about two feet in height and weighs between 55 and 80 pounds. 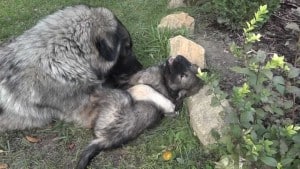 One Canadian breeder reports that height is actually closer to between 26 and 30 inches with weights between 100 and 150 pounds. In either case this is a rather large canine. They have a thick, somewhat long (about four inches) coat that can be either smooth or coarse. The Sarplaninac’s coat is usually tan, gray, black, or white. Because of their thick coats, Sarplaninacs often appear larger than they actually are. The Sarplaninac’s ears hang close to the cheeks and their eyes are almond-shaped and shades of brown. Sarplaninacs have muscular legs and bodies, with a thick, muscular tail that tapers at the tip.