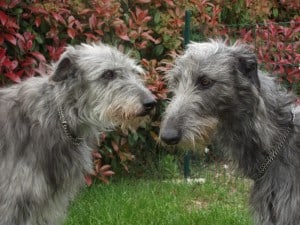 The Scottish Deerhound is related to the Greyhound and looks much like a wirehaired cousin of the Greyhound. They were originally bred in the Middle Ages to hunt deer with Scottish chieftains. The breed was the most popular among Scottish nobility, and became known as “the royal dog of Scotland.” In order to own a Scottish Deerhound at that time, one had to rank at least an Earl.

The Scottish Deerhound resembles a Greyhound in appearance, although they are somewhat larger and have a shaggier coat. The breed averages between 28 and 32 inches in height and between 75 and 110 pounds. They have a shaggy coat, usually around three or four inches long. The coat is quite coarse and usually a shade of gray, although brindle, red, and yellow are common as well. Scottish Deerhounds may have white markings on the feet, tail, and chest. They have a lean, elegant stature and carry their head high. The Scottish Deerhound’s tail is very long and reaches nearly to the ground. 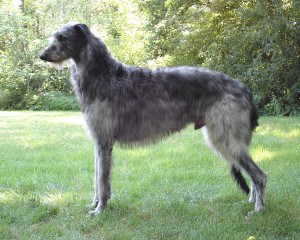 After guns began to be used for hunting, the Scottish Deerhound’s popularity declined and they nearly became extinct. Luckily in the 1800s Archibald and Duncan McNeill revived interest in the breed. Queen Victoria liked the breed, as did Sir Walter Scott. During World War II, when food was scarce, it was difficult to feed the large dogs, and many people destroyed their animals rather than see them starve. The American Kennel Club recognized the Scottish Deerhound in 1886.

Scottish Deerhounds should be brushed weekly. They need lots of exercise and so should be walked several times daily and allowed to play freely weekly.Scottish Deerhounds are susceptible to bloat and therefore should be fed a couple of small meals daily rather than one large one. It is wise to avoid exercise directly after eating. Common health problems associated with the breed are bloat and osteochondritis dissecans.