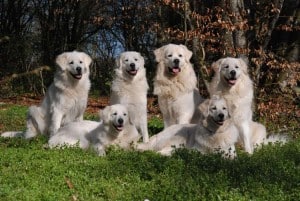 The Slovak Cuvac is a moderately large, rare Czechoslovakian breed. They are primarily used to herd and guard flocks of sheep, but are also good companions both for shepherds and laymen.Little information is available about the temperament of the Slovak Cuvac. However, it is generally agreed that this breed is very brave and loyal. The Slovak Cuvac has been known to fight off attackers as large bears and as vicious as wolves from their flocks. Despite their large size, they are quite sprightly in movement and capable of navigating any terrain.

The Slovak Cuvac is always white, a characteristic that was developed to differentiate the breed from wild dogs. They are fairly large, reaching 28 inches in height and weighing as much as 105 pounds. Their coat, which is always white as mentioned above, is thick and moderately curly. It is also fairly long, which combined with the features mentioned makes periodic grooming essential. They have a wooly undercoat, which protects them from inclement weather and insulates them against heat. They have a strong neck and head with a straight, broad muzzle. The eyes of the Slovak Cuvac are dark brown and egg-shaped with black eyelids. They have high, moderately long and hanging ears. 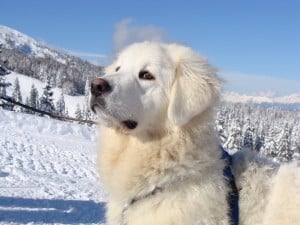 The ancestry of the Slovak Cuvac goes back to Arctic wolves that lived in the mountains of Eastern Europe and Asia since before the ice age. Dogs descending from these wolves have been used as herd dogs since ancient times by the people who lived in the Slovak mountains. They were used both for herding and as companions to the Slovak people. They are related to the Coral Dogs of Poland. The first official breeding of the Slovak Cuvac was done by a kennel by the name of “Ze Zlate Studny”, which means “of the Golden Fountain.” Their are currently about 800 registered Slovak Cuvacs in existence. The breed standard was published in 1965.