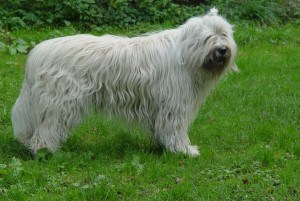 South Russian Sheepdogs, also known as South Russian Ovtcharkas or SROs, do not actually originate in Russia, instead this breed hails from either Spain or Germany. Because the South Russian Sheepdogs prime use has long been to guard flocks of sheep from harm, they tend to be quite domineering over what they think is their property. For this reason, it is necessary to teach them from a young age that they are not the dominant beasts in the household.

If they are not taught who is boss, severe discipline problems can arise. However, with a firm hand and patience it is quite possible to raise a South Russian Sheepdog who is an excellent companion. Training must be ongoing as SROs, particularly the males of the breed, will try to gain dominance not only as puppies but again when they near maturity.

Once they are aware who is in charge, however, they are great pets. They are good with children if they are aware the child is part of their family. They are quite protective of anything they consider theirs. They are for this reason very wary of strangers. It is best for the owner of a South Russian Sheepdog to discourage strangers from attempting to pet or caress them. When the dog becomes more comfortable with the person, he will seek out affection of his own volition. 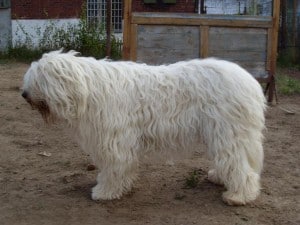 South Russian Sheepdogs are quite large. A minimum height is 25 inches, while most dogs grow to reach 30 to 34 inches. SROs can weigh as much as 160 pounds. Their coats are long, dense, and quite soft. They have a double coat, with a woolen coat underneath. Common coat colors for the South Russian Sheepdog include white or white with fawn or gray markings. Other colors, including black, or possible but not preferred. They are very strong and well muscled, with a deep chest and a muscular neck. Their tail is long and turns up at the tip. Despite their large size, they are quite agile and capable of moving quickly.

The South Russian Sheepdog’s roots go back to herd dogs from Spain or Germany mixed with larger Russian breeds. In the mid to late 18th century, flocks of Spanish sheep made their way to Russia. Transporting one flock of sheep could take as much as two years, and dogs accompanied the flocks to keep them together and moving. While sources differ on what breed the dogs were, it is likely that they were either the Catalan Sheepdog or the German Schafpudel, both breeds with shaggy coats like the South Russian Sheepdog. 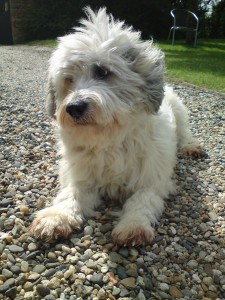 When the sheep arrived in Russia, keeping them moving was no longer a priority but guarding the valuable animals was. The smaller herding dogs were mixed with larger local dogs such as the Tartar Owtcharka, the Crimean Greyhound and the Hungarian Komondor. This resulted in a breed that was not only capable of keeping the herd together but also was quite apt at guarding the sheep from predators. By the 1850s, the South Russian Sheepdog was quite common, but they almost became extinct during the Russian Revolution. However, a biologist named A.

Brauner collected remaining South Russian Sheepdogs in the 1920s and helped reestablish the breed. The founded a breeding center of SROs in 1928 in Dzhankoi. South Russian Sheepdogs were first shown in 1930 at a German Dog Show. Unfortunately, since then the breed has fallen out of popularity and is once again quite rare.Because of their long coats, it is necessary to brush a South Russian Sheepdog at least once a week. Their coat is mostly self-cleaning and protects the dogs from both hot and cold weather.