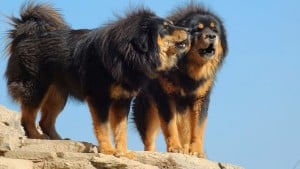 The Tibetan Mastiff is an ancient breed that may have existed as much as two millennia ago. It is even believed that a Tibetan Mastiff, or a precursor thereof, was Alexander the Great’s companion. Marco Polo was the first westerner to speak of the Tibetan Mastiff. In his travels during the 13th century he recorded a dog that was “tall as a donkey with a voice as powerful as that of a lion.”

Tibetan Mastiffs are quite loyal to their families and most are good with children and other animals, especially when socialized at an early age. They are protective of their perceived territory and for this reason they make good guard dogs. They stand their ground with other dogs and are cautious of strangers. They are fairly low energy dogs that, while friendly to their families, most do not enjoy games such as chasing a ball. Tibetan Mastiffs only shed once a year and they have very little doggie dander. For this reason can be good dogs for those with allergies.

Because of their large size and independent nature, some obedience training is recommended to control a Tibetan Mastiff in public situations. Tibetan Mastiffs do best in a spacious yard with a canine companion. They should not be kept in small houses or apartments, and they tend to be rather sedentary while indoors, so a larger yard is a must. These are large dogs that can dig large holes. While flock guardians are homebodies, they do require a minimum of a 6-foot fence. 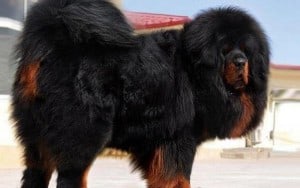 Tibetan Mastiffs were prized in Tibet for their guardian abilities, keeping watch over humans and animals like. It should be noted that this breed was originally bred to bark. A Tibetan Mastiff that barked all night was a dog that was prized, because that meant they were on guard, warning intruders to stay away. If a Tibetan Mastiff is left loose outside at night, they will tend to bark. If they are enclosed in a dog run, or kept indoors at night, they will usually only bark when danger threatens.

They have a mane around the neck and shoulder areas and a thick, furry tail that curls over the dog’s back. The Tibetan Mastiff comes in a full range of colors that include solid black, gold (cream to red shades), black and tan, gray and chocolate. White markings may be found on the breast, chest, and feet. They have moderately sized pendant ears that give the head a larger appearance when held at attention.

The Tibetan Mastiff was originally bred as a family and flock guardian, with its main responsibility to guard livestock from predators that included wolves and leopards. Their skills and ferocity were so great that one dog would be used to guard an entire Tibetan village. While Tibetan Mastiffs have become quite rare in their native Tibet, since Tibet first closed its doors to visitors from the West, they were likely the ancestors of many other breeds of mastiffs. 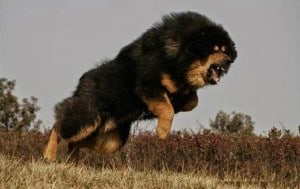 During the nineteenth century, a Tibetan Mastiff named “Bout” was given to Queen Victoria as a gift. This started a trend of importing Mastiffs to England, but the breed died out there during World War II. The breed was resurrected in the US, where it remains a stronghold today; beginning in the 1970s, with breeding stock being imported to America from remote Himalayan villages. The breed registry and studbook (TMCA and ATMA) went to the AKC in 2002, now a part of their Foundation Stock Service (FSS).

Tibetan Mastiffs should be brushed daily. Their energy levels are not particularly high. One walk a day should be sufficient. Because they are so large, over-exercise (such as overly brisk walks or jogs) can cause damage to their joints. However, lack of exercise can also cause joint problems, as well as obesity.Some health concerns common among Tibetan Mastiffs include hip dysplasia, hypothyroidism, skin conditions, ear infections, bloat, and a genetic disease known as Canine Inherited Demyelinative Neuropathy.