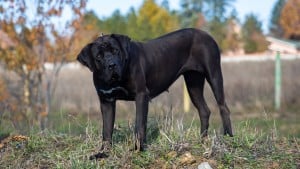 The Tosa Inu, also known as the Tosa Ken or Tosa Token, is a large Mastiff that originated in Japan. They were originally bred for fighting, though they are now most commonly kept as pets or used as watchdogs. Tosa Inus make very good watchdogs. They will attack any threat with no hesitation. They are very large dogs, often compared with the Japanese sumo wrestlers because of their size and power.

They can make good family pets if they are handled properly and trained well. They are very protective, especially of those they love, and do not particularly enjoy the company of strangers. They are incredibly strong animals, yet quite agile and capable of taking on the most powerful of foes. They are also used as fighting dogs, which they are very capable of being due to their power and stamina. 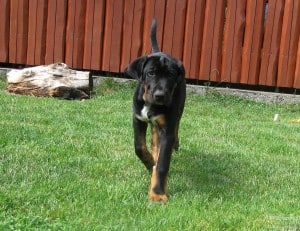 Tosa Inus are quite large. They can reach nearly three feet in height and can weigh as much as 215 pounds, although most dogs range between 100 and 175 pounds. They have a massive head with a broad skull and small, almost reddish eyes. The coat of the Tosa Inu is thick, short and flat. Common coat colors are red, fawn, brindle and black, with white markings possible. They have a very muscular body with a broad chest. Their hind legs are very muscular, which can aid in attacking, and their feet are small.

The Japanese have been breeding fighting dogs since the 1300s. The Tosa Inu is a recent addition to the long history of Japanese dog fighting. Named after the region in which it was first bred, The Tosa Inu is a mix of the Japanese fighting dog Shikoku-ken and various Western breeds. The Western breeds most often considered part of the Tosa Inus ancestry are Great Danes, Bulldogs, German Pointers and Mastiffs. Some people believe Tosa Inus are also related to St. Bernards and Bull Terriers.

It is unknown in what years the St. Bernards and Bull Terriers were added to the breed, but the other Western dogs used in breeding the Tosa Inu were introduced to the breed between 1872 and 1924. These breeds were used by sequential mating to encourage specific characteristics present in each of the Western breeds to the new dog. Some characteristics that the breeders of the Tosa Inu especially wanted to propagate were the stamina and fighting instinct common to Mastiffs.