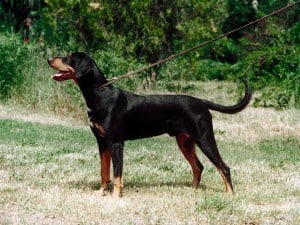 The Transylvanian Hound is known to have existed as long ago as the 16th century. They are most likely descended from a cross between domestic dogs, Polish Hounds and a Magyar dog that was brought to Hungary by the Magyars. Transylvanian Hounds tend to be one-man dogs. They form strong bonds with their primary owner and are extremely loyal to them. This makes for a good watchdog, as they will do anything to protect their owner. They are quite obedient and are very responsive to obedience training. 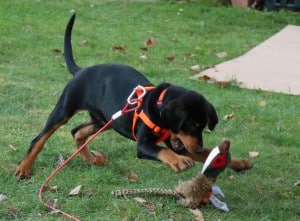 Therefore, they are not the ideal pets for people who live in urban areas. Transylvanian Hounds usually average about two feet in height and can weigh as much as 77 pounds. They have a short, coarse coat, usually black and tan in color, although tricolor coats appear as well. They have dark brown eyes and medium sized ears, which hang by the head. They are a very muscular animal, especially in the neck and chest region and have remarkably strong legs. Their tail is long and is carried parallel to their body, with a slight upward curve at the end. They can move fairly quickly despite their musculature and are quite agile.