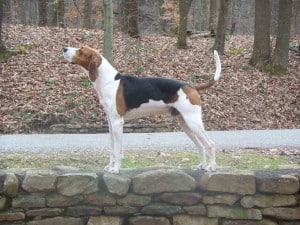 Treeing Walker Coonhounds are native to the United States.The Treeing Walker Coonhound, an established hunting dog, is known for its intelligence, kindness, courage and athleticism. These are working dogs that will not be happy in urban or even suburban areas. They need lots of room to roam and are happiest in a rural setting. The Treeing Walker was bred specifically to hunt the nocturnal raccoon. They are quite active and very brave. Walker Coonhounds are very easy to train. They enjoy hunting greatly, and thus are quite eager to learn how to do so in a manner that will please their owner. They have an excellent treeing instinct and a marvelous sense of smell, which makes them quite adept at hunting.

Some Walker Coonhounds can become quite vicious or very timid if not treated well. Treeing Walker Coonhounds generally range between 20 and 27 inches in height and weigh between 50 and 75 pounds. They have a short, shiny and soft coat, which is usually tricolor. Shades of white, black and tan are most common. Often, white or black is the primary color with markings and trim in the other shades. Bicolor dogs are also common. 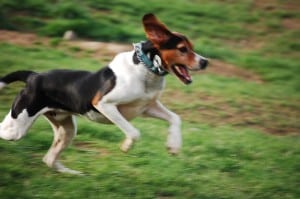 The Walker Coonhound’s coat is quite dense, which protects the animals from attacks and other casualties of hunting. However, accidents do happen and Walker Coonhounds do tend to get injured, resulting in wounds and scars. If the Walker Coonhound is to be shown, working dogs are not marked down for these injuries. Walker Coonhounds generally have a clear voice, which is reminiscent of a bugle, or else a clear, constant bark. The sound of their bark changes when they have treed an animal. They have a muscular body with sloping shoulders. They are agile enough, despite their muscular build, to respond quickly to stimuli.

Their tails are set high on the body, and taper towards the end. The tail curls up and over the body.Treeing Walker Coonhounds are descended from the English Fox Hound, which was first brought to American by Thomas Walker in 1742. Thomas Walker was a resident of Albemarle County, Virginia. Another likely ancestor of the Treeing Walker Coonhound was George Washington’s own fox hounds, which were imported from England in 1770. 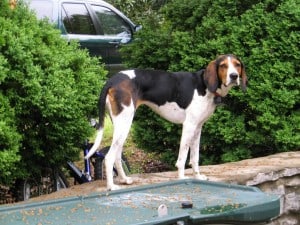 These two sets of hounds were the foundation for the Virginia Hounds, which were later developed by John W. Walker and George Washington Maupin into the Treeing Walker Coonhound. Once the breed was established, one cross was made that altered the breed greatly. That cross was in the mid 1800s, with a hound from Tennessee called Tennessee Lead. The origin of this dog is unknown, but he was likely related to the Virginian English Foxhounds as well. Tennessee Lead was an excellent hunting dog, with great stamina and speed.

The out-crossing of Tennessee Lead with the Walker Strain helped create the excellent hunting breed today known as Treeing Walker Coonhounds. When Walker Coonhounds were first recognized by the U.K.C, it was as a derivative of the English Coonhounds. In 1945, Walker breeders as the U.K.C. to separate them from the English breeds, and they began being registered as Walkers (Treeing) which later changed to Teeing Walkers.