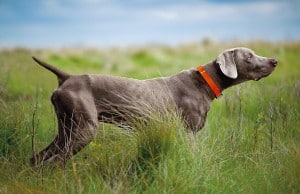 The Weimaraner, originally known as the Weimar Pointer, and nicknamed “the Grey Ghost” was first bred in Weimar, Germany in the 19th century. It was originally used to hunt large game such as boar and dear, but was relegated to bird dog when such large game became scarce. The Weimaraner is a large, dominant breed of dog. Bred as hunting dogs and retaining the search and seize instinct, a Weimaraner should not be kept confined. They generally do not prosper in city settings, although a Weimaraner may be okay in the city if given a lot of exercise.

Weimaraners are very enthusiastic and energetic. They are also quite determined to have their own way and can be difficult to train. They should be put in obedience classes as puppies, and the training should not cease after the initial period. It is essential that the family teaches this pet to obey all family members, otherwise, the Weimaraner will try to rule the roost, so to speak. However, training must be gentle and kind. If not, their friendly attitude may suffer. Inbreed variations in attitude are substantial. Some Weimaraners may make good watchdogs, as they are wary of strangers, while others may adore everyone. This characteristic depends on a variety of circumstances, including genetics and upbringing. Weimaraners can be good family dogs, although they may be overly enthusiastic for small children. 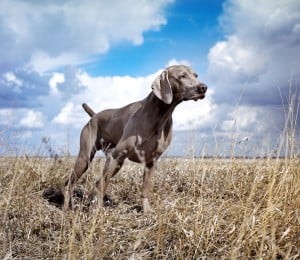 Weimaraners average as much as 27 inches in height and weigh as much as 85 pounds at maturity. They are incredibly strong, but, despite their large size, are quite elegant and graceful in appearance. Their is almost always gray, ranging in shade from very light to silver in color. A common Weimaraner trait is a white patch on the chest. Other white spots on the body are possible but not common. Some may be blue or black in color. A trait that breeders try not to encourage is a longer coat. For a time, people who liked the long-coated Weimaraner attempted to get this variation accepted, but to no avail. The Weimaraner’s head is muzzle/skull proportionate. Common eye colors include gray or blue-gray, matching the coat, or a light amber. Its nose is also gray. Ears are rather long, and the tail is short-about six inches in length in an adult dog. 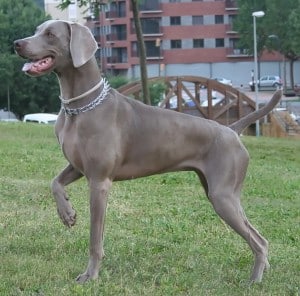 The Weimaraner’s ancestors are the Red Schweisshund, a tracking dog, and the German Shorthaired Pointer. Weimaraners, as they appear today, became common in the early nineteenth century, but even then they were rarely seen outside of Germany. The breeding of Weimaraners was very closely restricted. Only certain people were allowed to breed the dogs and a “breed warren” was appointed to determine which dogs would be allowed to breed. The first Weimaraners were brought to America in 1929 by Howard Knight, who was permitted to do so only after he was admitted to Germany’s Weimaraner Club. In the 1940s the Weimaraner was finally recognized by the American Kennel Club, where shortly after, the breed rose to fame when President Eisenhower brought a Weimaraner by the name of Heidi into the White House.

Weimaraners should be brushed about once a week. Their short coats makes any more than this redundant. They must be exercised several times a day due to their athletic nature. If not exercised they can become quite destructive. Weimaraners are susceptible to hip dysplasia and therefore should only be bought from breeders who guarantee the genetic credo of their animals. Also, the breeder should be certified with the Orthopedic Foundation for Animals. Some other common health problems among Weimaraners include hemophilia and eye problems.