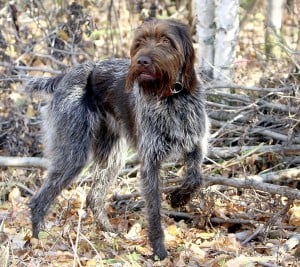 The Wirehaired Pointing Griffon is of Dutch origin, having been bred in the mid to late nineteenth century by a Dutch breeder by the name of E.K. Korthals. They were originally bred as hunting dogs, a purpose they are greatly skilled at and still widely used for. They are great companions for people who like to jog and enjoy the water. They do not do well in especially warm temperatures and so are good pets for people who live in a cooler climate. 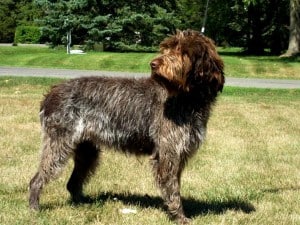 Likewise, they should begin obedience training young to acquaint them with social activities. They can be very gentle with children but they may be intimidated by the raucousness of the very young. They tend to be reserved around strangers but are neither aggressive nor unfriendly towards them. Wirehaired Pointing Griffons should not be kept in an apartment or a house without a yard. They need lots of activity as well as lots of personal playing time. If they do not receive plenty of exercise, they can become quite anxious and upset. They love to be around their people and should not be kept away from human contact in a kennel or tied in a yard.

The Wirehaired Pointing Griffon is a moderate sized breed, rarely exceeding 24 inches in height and topping out at about 60 pounds. Their coat is usually gray in color, although shades of brown, and either gray or white with brown markings are also common. Its coat is wiry in texture, hence the name, and is straight and of medium length. They have a thick, soft undercoat. They have hazel or yellowish eyes framed by large eyebrows and a dense beard. Their expression is often considered quite friendly. 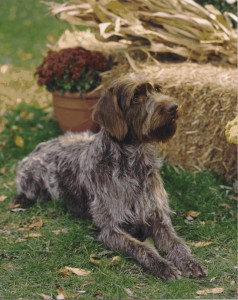