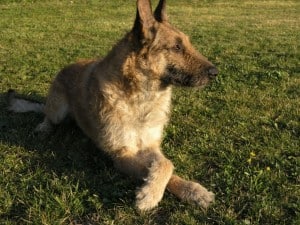 The Belgian Laekenois is considered the forefather of the Belgian Shepherd, and it is loosely related to the Bouvier des Flandres and other foundation continental herding breeds. The Belgian Laekenois is little recognized outside of its home country. This is truly a shame, as these lovely dogs are usually intelligent, hard working, and loyal. Because it was developed as a herding dog, this breed tends to be quite active If you own a Laekenois, you may need to exercise it each day. Although Laekenois often enjoy playing with children, they can be rough in their play and may not adapt readily to those they do not know.

Belgian Laekenois may not take well to any stranger, but they do make wonderfully loyal and protective animals. The Belgian Laekenois is generally reputed to be extremely intelligent, and many do very well in obedience trials. Many people say that their Belgian Laekenois takes to training quickly and remarkably well. This also means that Laekenois often need lots of attention to prevent them from amusing themselves in destructive fashions- digging up the yard, for instance.

These dogs also need to be socialized from a very early age, or they may show dominance problems, especially with children or other pets. Some Belgian Laekenois show herding behavior, and will attempt to round up family members or other animals! Because of their thick, wiry coats, a Belgian Laekenois generally needs little everyday grooming. This hard, water-resistant coat sheds dirt and burrs making it very easy care, but does require hand-stripping approximately twice yearly.

At maturity, a Belgian Laekenois usually stands between 23 and 26 inches, and generally weighs more than 60 pounds. Their coats are thick and wiry, and should generally not be washed more than is completely necessary to avoid drying out the already-dry coat. In color, Belgian Laekenois are red-tinted buff color, and may have white markings on the hind legs or the chest. Black or darker areas may also be in evidence about the muzzle or the tail.

The ears of Belgian Laekenois are rather small and high-set, and the feet are also small and round. Generally, Belgian Laekenois have medium-long tails that are not docked. Their bodies have sturdy, well-proportioned appearances and in general, these dogs do not appear heavy. Their harsh coats make them look a bit bigger, as well, since they can grow to about two inches in length. The tails tend to be quite bushy, as do the muzzle and head of the Belgian Laekenois. 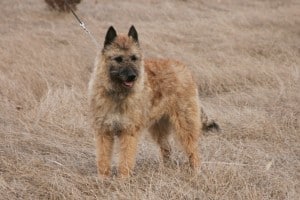 Belgian Laekenois may vary widely in temperament, and some may have problems with aggression or shyness. Physical problems include hip and elbow dysplasia, skin allergies, eye problems, or epilepsy. Breeding: It may be wise to begin socializing Belgian Laekenois puppies from birth to avoid personality problems later.