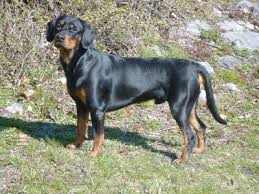 The Black Forest Hound usually stands around 18-20 inches tall and weighs between 44 and 49 pounds on average, though larger animals of 55 pounds are not uncommon. They are slender-bodied dogs and have thin coats, which are a described as hard and wiry in texture.

Their coats lie flat against their bodies. Black Forest Hounds are typically tan and blackish in color.
The Black Forest hound may be related to Eastern European hounds such as the Polish and Balkan Hound. They are still used by boar hunters and police, and have proved to be hard workers and are quite intelligent.