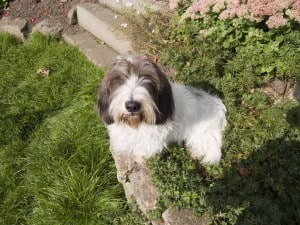 The Briquet Griffon Vendeen is also known as the “Medium Griffon Vendeen”. This breed is classified by several breed organizations as a “hound” or more specifically as a “scent-hound”. It is most certainly a working breed, developed centuries ago for hunting.

Generally a hardy dog the Briquet Griffon Vendeen is an excellent hunting dog that is capable of flushing a wide variety of quarry, though they were originally bred to hunt deer. Fast and agile these dogs are able to navigate a wide range of terrains! Because this breed has been bred for the hunt they are generally highly independent and are even described by some as “unruly”. They are reported to show a great zest for chasing and even killing their prey in the field.

The average mature Briquet Griffon Vendeen will weigh between 35 and 53 pounds and measure between 19 and 22 inches. Their thick bushy double coats should be wiry to the touch. Woolly soft coats are considered a fault in the show ring. Coat color can range and is accepted in the following colors and patterns, white and orange, white and gray, black and tan, tricolored or solid colors of fawn, orange, gray or light brown. Some of these colors may not be accepted by all breed clubs. They have low-set floppy ears and relatively short heads. Their large eyes are typically dark in color and they have black noses. 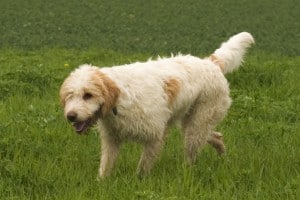 The Vendeen Hounds of Gris de St. Louis may be the early ancestors of all four varieties of Griffon Vendeens. Sadly, these dogs are very uncommon, even in their native France. Their numbers were greatly reduced during the second World War and they have not made much of a resurgence since that time.