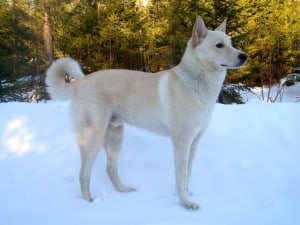 The Canaan is a very healthy and hardy breed and one of the few breeds still existing that is considered a “primitive dog” – very much as it was thousands of years ago. It is also one of the few dogs in the world that is physiologically suited to living in difficult desert conditions.

The Canaan Dog is not suitable as a pet for everyone. It is important to take into consideration some of the breed’s typical characteristics before making a final ownership decision. The Canaan Dog is extremely loyal but is also known for it’s independent nature, and is therefore not simply a submissive lap dog. The Canaan Dog is devoted and protective of its family and territory and is friendly and welcoming to those it knows well, but can be fairly standoffish and suspicious of strangers or those it does not know well.

The Canaan Dog is highly intelligent and one of the most adaptable of dogs. It should be well socialized from a young age, exposed to varied situations, environments and people, and training in obedience from a young age is advised. This dog has a propensity to display dog aggression and is highly territorial and thinks very independently. He also may show a tendency to be dominant if he does not feel that he has a “pack leader”. The Canaan Dog is a dog of character, but is not the best dog for an owner without experience in handling dogs or an owner who does not command authority and respect from his dog. 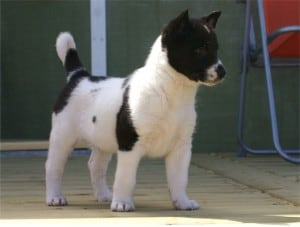 If you do possess these qualities, you can develop an excellent relationship between yourself and the Canaan Dog. The Canaan is highly alert and an outstanding watch dog, aware of everything unusual that is happening in his territory; he is quick to alert, but does not bite without a very serious reason. If educated properly as to what is normal and what is not, he will not bark excessively. The Canaan Dog does like to dig and make himself “dens”, which can cause a problem to those that are keen gardeners.

The Canaan Dog is a dog of medium build and moderate bone. Males are 20 to 24 inches in height and females 19 to 23 inches; females should look distinctly feminine and males distinctly masculine. Males tend to be heavier than females at 45 to 55 pounds, where the average females weights between 35 and 45 pounds. The head is a blunt wedge shape, with obliquely set prick ears, dark almond shaped eyes, and an alert and keen expression. The well-furred tail is carried curled over the back, especially when the dog is excited. The Canaan Dog comes in a variety of colors, ranging from white or cream through desert shades of sand, beige or red, to black, most with some white trim. 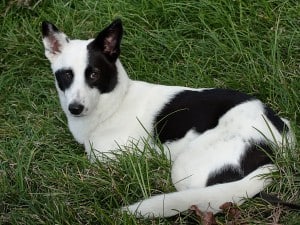 They may also be white with black, red, or cream markings, and a black mask on any color is allowed. The coat is a thick and weather resistant double coat of short to medium length, and can be either flat or somewhat standoff. Lack of undercoat is a serious fault, as the harsh climate of the breed’s homeland requires a protective coat. The Canaan Dog sheds twice a year. Movement is very light, athletic and agile; the Canaan Dog, although not requiring a great deal of exercise, is capable of covering a great deal of ground without tiring. This is a natural breed that does not require trimming or extra care.

The Canaan Dog originated about 5000 years ago in what is today the State of Israel. It was a feral dog, living free on the fringes of civilization. Pups were caught and brought up to fulfill various tasks of guarding homes and herds. The Canaan was valued highly as a herd guardian that would alert to anything endangering the flock, whether human or animal.

To present times, there are still Canaans living free in the Negev Desert and theArava of Israel, and they are still caught and valued by the Bedouin as guard dogs. However, the population of free living Canaans has been seriously depleted, and most are now from domestic stock. The Canaan Dog was “redomesticated” in the 1930s by Prof. Rudolphina Menzel, who collected dogs from the wild and the Bedouin and began breeding them. She was responsible for the initial preservation of the breed, wrote the first breed standard and achieved FCI recognition for the breed. 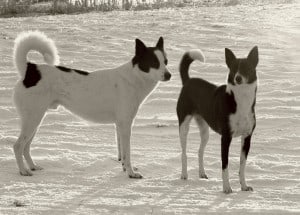 The Canaan should be brushed once a week to maintain a healthy coat, and more frequently when shedding. The Canaan Dog should have moderate daily exercise, and should be exposed to various people and environments to prevent them from being overly suspicious. The Canaan Dog is a healthy and long lived breed. They do show a tendency to be sensitive to parvovirus as puppies. There are some families in the United States that have exhibited problems with epilepsy and thyroid disease.