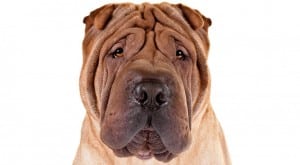 The Chinese Shar-Pei is a fascinating and unique breed believed to exist since the Han dynasty in China (in power around 200 B.C.). The Shar-Pei’s rough, bristly coat gives him his name, “Shar” is a gritty type of sand, and “pei” is a Chinese word for dog.

The Chinese Shar-Pei, also known simply as the Shar-Pei, or the Chinese Fighting Dog, can be independent and sometimes stubborn, though they are always devoted to their families and masters. In fact, it is often said that they prefer the contact of humans over contact with other dogs. They can also be protective and territorial, wary of human and animal strangers.

This considered, they will need socialization and obedience at an early age. Training and socialization aside, Shar-pei may still confront other animals. Whatever the case, they are not recommended inexperienced dog owners. Considered to be the perfect watchdog, they are not good guard dogs. They will rarely be aggressive towards humans.

A mature Shar-Pei will grow to a height between 18 and 20 inches and will they will usually weigh between 35 and 55 pounds. Their bristly coats may be one of three styles, including: “horse” (under 1/2 inch long), “brush” (1/2 to one inch long), and “bear” (over one inch long). Their coats are usually cream, fawn, red, or black, though they are also seen in several other colors including blue, lavender, and chocolate.

Brush their coats weekly to prevent infections and check their skin folds often. The Shar Pei has two distinct facial structures. There is the “meaty mouth” version, which some people describe as a ‘land manatee’ because of the heavy nose. This type is typically seen in advertisements, and can be quickly identified because of their heavy wrinkles. 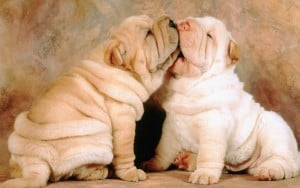 The other type is the “boney mouth” version, which is characterized by a slender nose, like a weimaraner, and they usually have much less loose skin, and fewer wrinkles, except around the face. In general the Shar-Pei’s loose skin, small ears, thick muzzle, and high-set curly tail lend to their distinctive look. Historically, their thick skin protected them from an attacker’s sharp teeth and claws. The Shar-Pei is compact and muscular with a square build and tiny ears.

The Shar-pei originated in China over 2,000 years ago and was originally bred for hunting and dogfighting.The Chinese Shar-Pei may be susceptible to skin and ear infections, entropion, actropion, atopy, demodectic mange, hip and elbow dysplasia, patellar luxation, and hypothyroidism.Grooming requirements are minimal, they need weekly brushing to prevent skin infections. Their folded skin should be examined between the folds regularly.