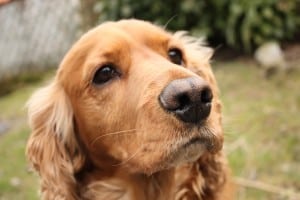 The English Cocker Spaniel did not always live in England. They likely originated in Spain and were brought to England and Wales in around 1000 AD. They were used to track and flush game until the advent of the gun, when they began to retrieve game as well.The English Cocker Spaniel is quite friendly. They are very playful and affectionate and generally get along well with children, as long as they are introduced at a young age. Otherwise, they may be bad-tempered towards the children. They are definitely family companions and are not at all happy if left out of anything.

They tend to do well with other dogs and small animals, although socialization is useful. In addition, it is a good idea to watch males when they are together, as they can be aggressive in this situation. English Cocker Spaniels do very well in obedience training, as they are quite intelligent. They will likely bark to alert their owners of a stranger approaching, but they are not usually aggressive towards them and are not to be considered to be very protective of their property. English Cocker Spaniels love to play and retain their puppyish joy their entire life.

An attractive, moderately sized animal, the English Cocker Spaniel usually stands about 16 inches in height and weighs between 26 and 34 pounds. They have a soft, silky, average length coat. It is common to have feathering on their ears, belly, legs and chest. The coat is generally white with black markings, as well as red, blue, even liver markings. They can be black, red or liver, with or without tan markings. They have long, hanging ears with a longer muzzle than the American Cocker Spaniel. 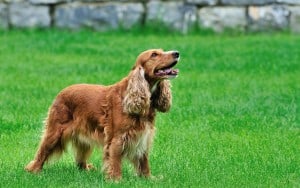 The name ‘Cocker Spaniel’ comes from the verb ‘to cock,’ which is appropriate because of their ability to drive game from cover. The English Cocker Spaniel’s main purpose has long been to flush woodcock from the forests and other growth in England’s dense terrain. Retrieving game from water made them very useful. Most English Spaniels were thought of as one breed until the early 19th century, when distinctions became apparent. The English Cocker Spaniel was recognized as a separate breed in 1893. They have long been successful show dogs, having won more ‘Best in Show’ titles than any other breed.