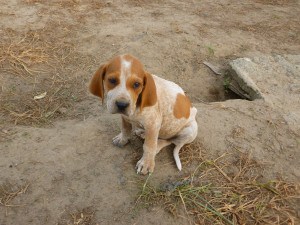 The most common color of the English Coonhound is a redtick, that is, white with red spots. Other color patterns can be found, such as a bluetick coloration, which is a black color on a lighter background. It should be noted that this breed was not bred for a uniform coloration, but to serve a purpose- hunting. The body of the English Coonhound is quite strong, with a deep, powerful chest and strong legs and feet. The muzzle of the dog should be square and of good length, the nose should have large nostrils, and the eyes should be wide. 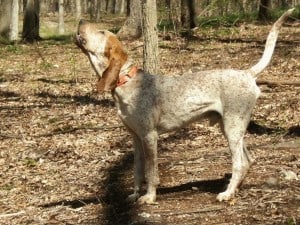 The background and history of the English Coonhound is rather interesting. A man by the name of Robert Brooke brought his hound pack with him in 1650. In 1742, Thomas Walker had hounds imported into America from England and in 1770, George Washington who was known to be a foxhunter, also had hounds imported into the county. These dogs were the forerunners of what was known as the “Virginia Hound,” that in turn, led to the present day English Coonhound. Originally, the English Coonhound was registered under the title “English Fox and Coonhound” by the United Kennel Club in 1905.

At that time in history, the hounds were used more for hunting foxes than they are today. It is also interesting to note that initially, the Treeing Walker and the Bluetick Coonhound were registered as English Coonhounds. It wasn’t until the 1945 and 1946 that these breeds were recognized as separate breeds by the U.K.C.Typically, a healthy female English Coonhound can produce 12 to 14 puppies. It is interesting to note that in a single litter, there can be a variety of color combinations, resulting in redticks, blueticks, as well as other colors.