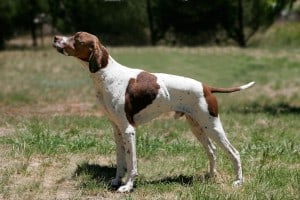 The English Pointer is popular as both a hunting dog and a companion, dominating the Pointing Field Trials, and is recognized by all major kennel clubs.Good with children, the English Pointer is gentle and patient with even the smallest kids yet playful and loyal as well. They are devoted and affectionate towards their family and will do anything in their power to please their master. They are very energetic, both in play and while hunting.

However, they are relatively calm indoors. The English Pointer needs lots of exercise and is happiest in a home where he has lots of room to run and play. English Pointers are quite intelligent and therefore easy to train. However, early socialization is necessary, as some members of the breed can be rather timid and high-strung.

Some English Pointers are independent, become bored easily, and most are cautious of strangers. This aloof attitude towards unknown people makes the English Pointer bark at strangers, although it is not a watchdog. Different lines of English Pointers have been bred to be specifically show dogs or hunting dogs.

Of these, the show lines make better pets. Field lines have a very strong natural hunting instinct, which develops early. Puppies as young as eight weeks old display pointing behavior. When hunting, the English Pointer is particularly adept at tracking upland birds but is quite capable of hunting other game as well. They are best suited to hunting in warm climates. They do not do well in the cold or in water. The English Pointer is one of the most popular and most successful pointing breeds. 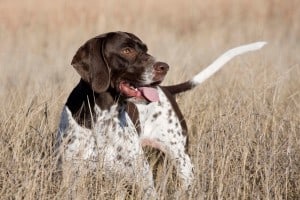 The English Pointer is a moderately sized breed, reaching up to 24 inches in height and weighing between 44 and 66 pounds. They have hazel or chestnut eyes and their noses are the same color as the markings on their coat. The coat is usually white with black, orange or liver markings. The coat texture is short and rigid. The English Pointer’s expression is usually alert. Its ears are somewhat pointed and hang next to the head. They have a long, elegant neck and a straight, tapered tail.

Although the exact origin of the English Pointer is unknown, most people believe it was developed two hundred years ago from a mix of many. The Italian Pointer, Bloodhound, Foxhound, Greyhound, Newfoundland, Setter and Bulldog are among those mixes. Although this mixture is extremely varied, it would account for the amazing versatility of the breed.

This recent Pointer has been in existence for only about 80 years, but similar breeds were being developed as long ago as 1650, when the first written mention of the Pointer appeared. The name ‘Pointer’ refers to the stance the Pointer assumes, without moving, when he finds game. The early Pointers were primarily used to locate hare for Greyhounds to pursue.

English Pointers require little special care. Besides needing a great deal of exercise, they need a small amount of grooming. They should be brushed often with a stiff brush. Bathing the English Pointers often is not necessary. Rubbing them down with a piece of cloth works very well. Drying their feet after hunting or exercising to keep them from getting a chill is also a good idea.