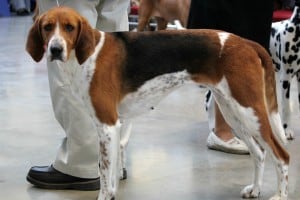 The Harrier was bred in England and was probably developed by mixing the English Foxhound with Fox Terriers and Greyhounds. They are likely related to the Talbot Hound and the Basset Hound as well.A very affectionate breed, the Harrier greets family, friends and strangers with bounding energy and playful antics. They adore children and love to play with them.

However, they are so playful and high energy that they may knock over very small children and so should be well socialized. Harriers enjoy the company of other dogs, and do well with other animals if socialized to them as pups. However, they may chase cats if not raised with them.

Harriers do fairly well in obedience training, although the scents of other animals may be distracting. Harriers are ideal animals for rural environments. However, they do not do well in apartments and may be unsuitable for suburban living if only a small yard is available for them to roam in. If Harriers are not exercised sufficiently, they may become stubborn and destructive.

The Harrier is a moderately sized animal, reaching about 21 inches in height and weighing between 40 and 60 pounds. They resemble the English Foxhound, albeit somewhat smaller. They have a muscular body and a short, hard coat. Common coat colors are lemon or red with white or white with tan, although all colors are possible. Harriers have large bones, which give them added strength and stamina. They have a medium-length tail, which is carried high and rounded, pendant ears. The Harrier’s eyes are brown or hazel and its nose is black. 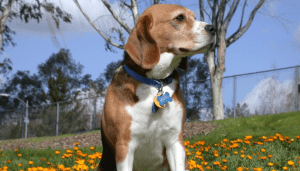 Harriers were originally bred to hunt hare, although they are also used to hunt fox. The name comes from its use as a hare hunter. The Harrier is fairly rare in the United States, although it has long been popular in England. It hunts in a pack and uses its amazing sense of smell to find game. All major kennel clubs recognize the Harrier.

The Harrier requires a lot of exercise. It should be given long walks and the opportunity to run. The Harrier should live somewhere where they can roam freely. They are great companions for active individuals. The Harrier should be brushed once a week.Although Harriers are generally a fairly healthy breed, hip dysplasia is possible. Epilepsy has also been known to occur.